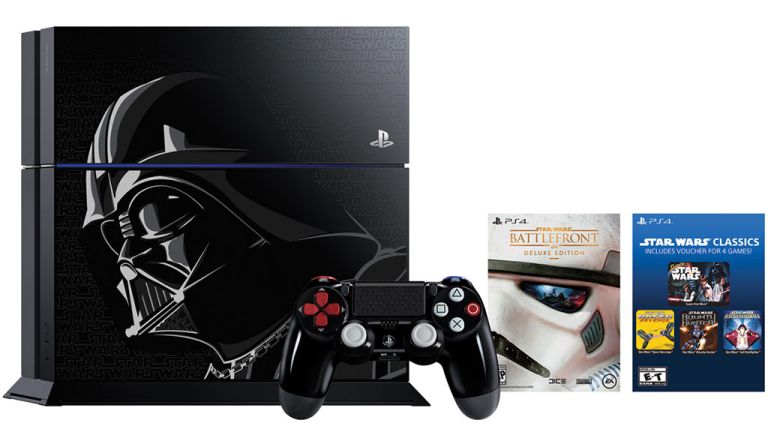 Soon you won't be able to open your eyes in the morning without having something Star Wars immediately jammed into your visual cortex such is the ramp in marketing and merchandising. Sony is the latest to announce a Star Wars line, showing off a new Darth Vader themed PS4 and bundle at Disney's D23 Expo.

It's been designed to coincide with the release of Star Wars Battlefront and the limited edition console will be hitting the shelves on November 19 here in the UK, the same day the game officially launches.

The 500GB console is rocking the classic Darth Vader samurai-esque mask printed on the side of the device and also comes with a limited edition Dualshock 4 controller whihc is apparently inspired by Vader's chestplate.

It's the latest CUH-1200 edition of Sony's flagship console, so comes with the mechanical buttons, matte finish, lower-powered PSU and quieter operation.

As well as this limited edition bundle there will also be a standard edition which simply features the standard black PS4 (again the CUH-1200 version) and standard Dualshock controller, but comes with the Star Wars Battlefront and the four remastered games.

This new Star Wars console isn't the only new PS4 console coming out - there's this one coming from from China...with an Xbox controller...hang on, there's something not quite right here...

Turns out this Ouye console is an Android-powered machine inspired by the top two consoles, seeking crowdfunding at the moment in China.

Though we wouldn't be surprised to find even that gets some Star Wars branding at some point...

Meanwhile, here's the announcement video for the new official PS4: