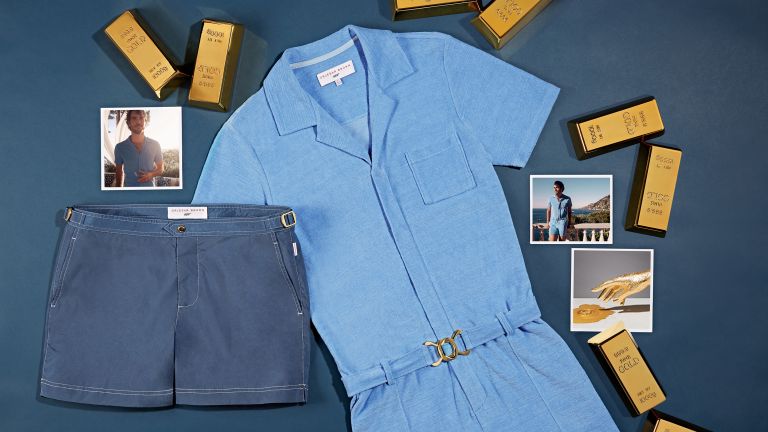 The new collaboration expands from swimwear (although, there's plenty of that, too) to provide a full holiday wardrobe, with everything from polo shirts to dress shirts, and safari jackets to espadrilles, fusing Bond’s classic and refined style with Orlebar Brown’s resort wear in signature fabrics.

The pieces in the collection directly reference outfits worn by Sean Connery, Roger Moore and George Lazenby during their time as 007, and fans of the franchise will surely recognise certain looks from Dr. No, Goldfinger, Thunderball, and more.

You can check out the entire collection below:

The collection demonstrates a meticulous attention to detail, which even extends to the labelling. For example, inside the Towelling Robe you'll find ‘The Property of Dr. Julius No, Crab Key,’ recalling a scene from Dr. No (1962) where Sean Connery as James Bond and Ursula Andress as Honey Ryder are imprisoned on Crab Key island outfitted in similar robes.

A few favourite pieces of ours are the Towelling Polo, inspired by the one Bond wore when he first encounters Honey Ryder; the Navy Merino Polo, similar to the one Bond wore to investigate Largo’s Palmyra estate under the cover of night in Thunderball (1965); and the Thunderball Swimshorts, based on the shorts worn by Bond during his first encounter with Domino while he’s diving in the Bahamas.

Of course, we can't not mention the Riviera Towelling All-In-One, AKA, the Goldfiner Onsie, inspired by a similar style worn by Bond to investigate Goldfiner’s hotel suite in Miami. Orlebar Brown's version used their signature cotton towelling with self-fabric belt, fastened by a gold-effect clasp.

There's no need to Q, you can buy the collection on Orlebar Brown's website, with prices start at £145, and further styles will be released in June 2019.