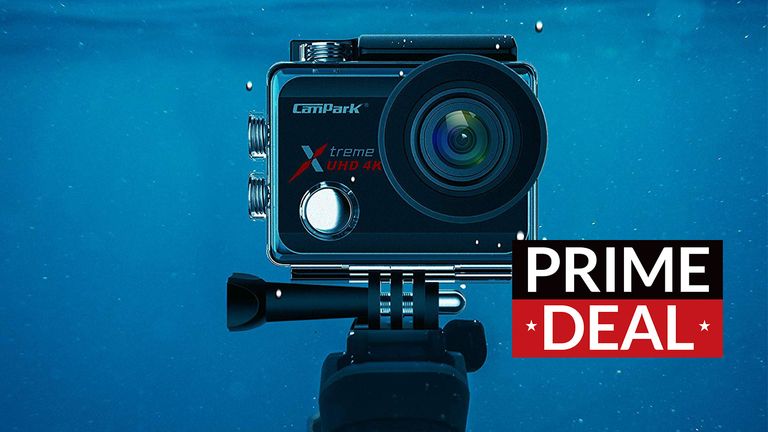 You will need to have an Amazon Prime membership to get the X30 Real at this price, or sign up for a free 30-day Prime trial if you’re not already a Prime member.

Campark’s budget GoPro alternative is capable of capturing 4K at 60fps, 2.7K at 30fps, 1080P at 120fps, and 720P at 240fps. It’ll also capture 20MP stills, which is a great feature for those of you wanting an action cam as much for quality stills photography as for recording action videos. And it’s compatible with third party mounts.

The X30 Real 4K is a step-up from true budget action cameras for complete beginners, kids and casual users only looking for a simple, mess-around rugged shooter. This Campark cam actually puts in a decent performance in and out of the water, and utilises built-in electronic image stabilisation (EIS) to produce smoother videos with less judder.

We’re not saying the EIS is anywhere near as good as the GoPro Hero 7 Black’s HyperSmooth or the RockSteady EIS used by DJI’s new Osmo Action, but for the price it’s decent. And you’ll need EIS is you intend on filming any fast-moving action or sport, such as if you’re going to film yourself mountain biking or white water rafting.

The camera features an all-important two-inch IPS touchscreen for accessing the menus and for viewing playback of footage, and you can share your clips and pics straight from the camera to your phone via the DV King 4K app (iOS, Android).

The X30 Real is waterproof down to 40 meters when used with the included waterproof case, so you can take it diving or snorkelling too. The lens angle is also fully adjustable from Wide (170 degrees) to Middle and Narrow.

The Campark X30 Real Action Camera is one of endless Amazon Prime Day deals now available as Amazon’s summer sale swings into town. But this £56.99 deal ends at 11.59pm on 15 July (or sooner if it sells out). So if you want one, get it while it’s hot.