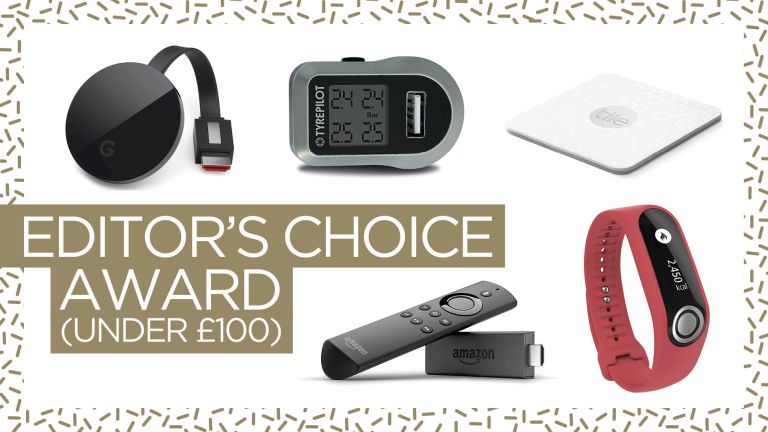 The T3 Awards, or the Oscars of Tech, as many call them – are now in their 11th year, and bigger than ever. Literally, in fact, as we have added a number of new categories this year to reflect the changing face of tech. This category, however, is for the Editor's Choice Award and features the year's most awesome sub-£100 pieces of technology.

Read on to discover this year's contenders...

The Chromecast Ultra does exactly what it promises to. It offers reliable 4K HDR streaming onto compatible TV's. The only difference being it can longer be powered by the TV USB port anymore, it needs to be plugged into a wall socket.

If you have a 4K TV or are planning on getting one, Ultra maybe the Chromecast for you. The extra feature does double the cost, £69/$69, but it is still a cheaper alternative to Amazon's Fire TV or the US-only Roku 4.

Each Tile Slim measures in at just 54 x 54 x 2.4mm, so they are thin enough to carry in a wallet or smartphone case, and can be attached/deposited to pretty much anything, meaning that losing your valuable tech is no longer an issue.

The TomTom Touch Cardio can measure your steps taken and calories burned in a day, as well as track your heart rate. The design is minimalist, with a slim build focused on a large OLED display that offers data on the day and night monitoring (yes, it tracks sleep too), and it also offers smartphone notifications for calls and messages. All collected data can, naturally, be accessed and analysed by a slick smartphone app too.

If you are a Prime member, then the Amazon Fire TV Stick is a superb device that elevates the Prime service and will be everything you want in a streaming stick.

Alexa is a great addition to the Fire TV stick too and, while the lack of 4K will be a barrier to some, there's little argument - the Fire TV Stick has a strong case to be called the best-all round streaming device available today. It's available for a great price, too.

Simply put, the Snooper Tyre Pilot makes tyre pressure monitoring incredibly easy and straightforward. The device allows its user to measure all four of their car's tyres simultaneously and wirelessly, with audible alerts delivered when pressure changes are detected.

The device, which comes with a clear LCD display that measures only 47mm in width, also features a fast leakage alarm, meaning that if the driver runs over a nail or other sharp object, they are informed immediately.

Beeline is a Bluetooth bike compass that instead of plotting a direct route for you to your destination, as a GPS mapping system would, instead simply points you in its general direction and lets you know how far you've still to travel.

The idea is that its user therefore gets to choose which route to take and, if travelling through unknown areas, gets to explore it by spontaneously deciding on the precise route.

How the winners are chosen

Most of the winners - including this category - are decided by the T3.com and T3 magazine teams, aided by a panel of expert judges from the tech biz.