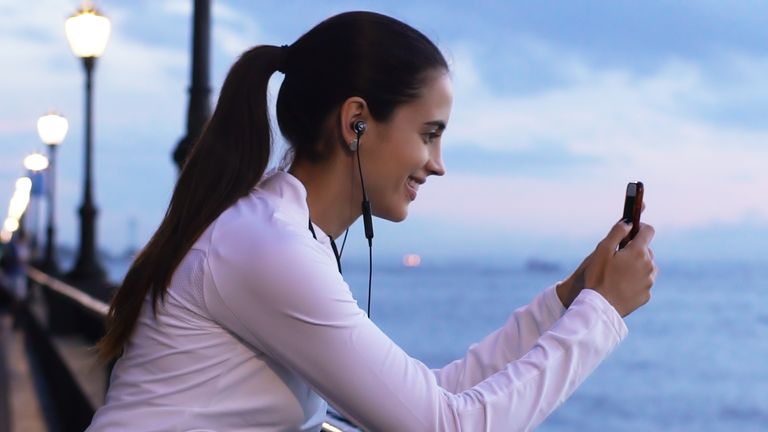 What happens in Vegas, stays in Vegas, right? Not in January, when 180,000 people swarm on the city to see the latest and greatest gadgets, many of which which are designed to make everyone's return journey home just that little bit easier.

From adaptors that work in 195 countries to smart luggage, smart wallets and even 'feelables', here's our pick of the best travel gadgets from this year's CES.

Home about some hands-free hand luggage at your side? Debuting at CES from ForwardX Robotics was Ovis, an autonomous suitcase that stays beside you at the airport.

It uses computer vision algorithms to automatically follow your side, all the while avoiding obstacles. The battery built-in to power its motor also doubles as a built-in power bank for keeping a smartphone fully charged.

Did you pack your passport? Adero is an intelligent organisation system designed to act as a personal assistant that always know where your things are right when you need them.

It's powered by Smart Tags and that fix to luggage, backpack and bags, and 'Taglets' that attach to valuable like a passport, wallet, laptop or headphones. So before you leave home– and at any point on your journey – press the smart tag on your bag and it will light-up green if all of your valuables are inside.

Naturally, there's an app for more detail, which also adds event-based reminders and LED alerts if something's missing. A starter kit of three Smart Tags and three Taglets costs US$119.99 (£95).

Remember that Kindle you bought, loved, then tossed aside? Well, the E-Ink display that Kindle first popularised is back, and better than ever on this 7.8-inch, A5-sized device.

Unlike the Linux-based Kindle, which restricts file formats and content, the Nova Pro runs on Android 6.0 and has 2GB of RAM, 32GB of storage, and a 1872x1404 resolution. Almost any file format can be opened on the Nova Pro, including PDFs, Word documents and much more.

What’s more, anything can be annotated using a stylus, and saved as an image file. Any app from Google Play store can be loaded, so in theory you could have apps for Kindle and Kobo, as well as for Dropbox. It goes on sale in spring.

Frequent travellers know that so-called 'worldwide' travel adaptors are nothing of the sort, almost always lacking a 'type M' adaptor and therefore useless in parts of Africa and Asia.

This clever two-in-one works in 195 countries around the world, the first to get anywhere near 'universal' compatibility, by offering a type M as one of its multiple interlocking modules, which are secured together using magnets.

One of those modules is also a powerbank, so you can stay charged between hotel rooms. Nomadplug will sell soon for US$120 (£95).

Bluetooth earphones have always had one drawback; battery power, or lack of. Dubbed the 'Swiss Army knife of earphones' by Taiwanese brand 49101, this neckband-style product is unique because it has pop-out USB-C, micro USB and Apple Lightning connectors that can draw battery power from any smartphone (though only older models without USB-C).

However, it works both ways, so you can inject power from Changer into a phone that's down to 1% just at the crucial moment… such as after a long flight when you need to organise an Uber.

A dash cam is a wise accessory for road-trips, for obvious reasons. Equipped with Sony Exmor R Starvis sensors for both front and rear cameras and using an Ambarella A12 processor, the Thinkware Q800 PRO's front camera captures in QHD (that's 2560x1440 pixels, or 3.6 megapixels), a significant improvement on the full HD (one megapixel) most dash cams capture.

It's also got a polarising filter to reduce dashboard reflections, Super Night Vision 2.0 for clearer night time footage, and built-in GPS for embedding speed, time and location data into recorded videos. It's even got a time-lapse mode that captures two frames per second for up to 72 hours.

Losing your wallet is the absolute worst thing that can happen while travelling, and yet so-called 'smart' wallets do little more than make your phone beep a couple of times until the pickpocket gets beyond 20m.

The Volterman Travel wallet (US$169/£133) changes the game by being trackable globally, but also has an embedded camera that takes a photo of anyone who opens it. It then sends that image via email to its owner. Other features include an embedded 5,000 mAh battery.

Of all the predictions of what would be at CES, nobody expected 'floatables'. Sand and dirt resistant for the beach, and waterproof for using in swimming pools, in the latter scenario the rugged Cannonball and Cannonball Max circular Bluetooth speakers float in water using stabilisation tech.

Have guitar, will travel. Despite the old saying, it's a right pain to travel with a guitar. Cue Jammy, an electric guitar that has a collapsible neck that's only 45 cm long when detached.

Easily fitting into most backpacks, it can be plugged into any amp, and you can listen to yourself through headphones, too. It's even got USB-C, Bluetooth, and its own smartphone app, and it play nicely with GarageBand. Its costs US$349 (£275).

Bluetooth speakers for the beach are a great idea, but where do you put your drink? Solving that key conundrum is Sony, whose unusual and powerful PG10 stereo system has a flip-out table on its top complete with spaces for four drinks.

Naturally, that table top is splash-resistant in case of accidents. Also here are some practicalities, such as a a carry handle, a 13 hour battery, Bluetooth, an FM radio, an unusual tripod connection, and a powerful Outdoor Party Mode.

However, slightly unexpected is a microphone slot, making the PG10 also an outdoor karaoke machine. How horrific. It's out in April 2019 for US$250, and on sale in Europe for €290, but there's no confirmed UK price.