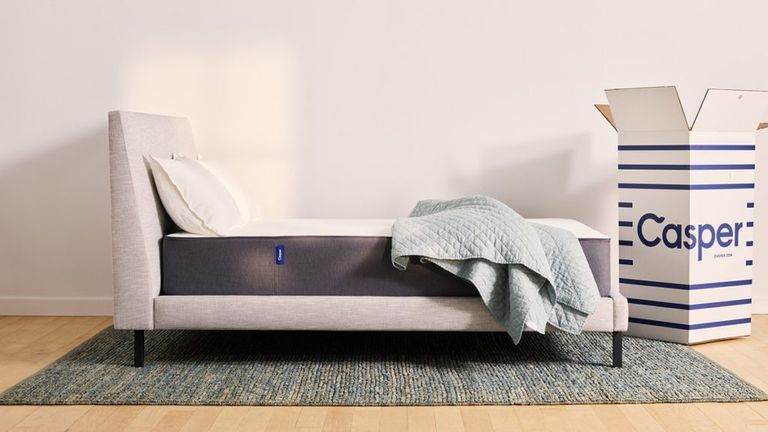 Casper mattress deals have started arriving for 2020 – and they're good. We've already seen some huge Casper mattress discounts at Amazon this month, including up to 40% off in the UK, and almost 20% off in the US. There are also currently Casper promotions running on both the UK and US Casper sites.

The Casper mattress is one of the best mattresses you can buy. It boasts four layers of premium, pressure-relieving foam – and a springy, breathable layer on top – making it cool, supportive and exceptionally comfortable. (Casper has industry awards and thousands of glowing reviews to prove it.)

We'll be curating the best mattress Black Friday deals for all Casper mattresses here on this page, so you can be sure you’re buying your Casper mattress for the cheapest price possible. Read on for today's best Casper mattress deals, discounts and promo codes...

Casper mattress: up to 40% off | Amazon
Save up to £240 - This unexpected Casper offer at Amazon slashes a whopping 40% off the price of a single mattress, taking it from £400 to just £242. There’s also a huge 30% discount on the king and super king sizes, and 32% off the double. Deal ends: unknownView Deal

Now is the best time to buy The Casper mattress

The Casper is the mid-range – and most popular – of Casper's three mattresses. Made from memory foam, it boasts a smart design to provide maximum comfort and support, with four different layers of foam. The springy, breathable, open-cell top layer keeps you cool and gives the mattress some bounce, leaving you feeling perfectly supported and practically weightless; while the layers beneath provide more support, even weight distribution and better spine alignment.

The end result is a mattress that's neither uncomfortably firm nor unpleasantly soft. It helps maintain an optimum sleeping temperature – and should provide you with years of quality sleep.

For the best cheap Casper mattress deals, choose the budget Essential mattress. Despite having only two layers of memory foam, it remains extremely supportive and comfortable, and has picked up some significant awards since launching this year. At full RRP, it starts at just £275 for the single model, going up to £550 for a super king. Bargain.

Alternatively, choose the new Casper Hybrid mattress. It's Casper's most supportive  (and expensive) mattress yet, made from Casper's signature pressure-relieving foams and an extra layer of high-quality springs for added bounce and luxurious support. It starts at £500 for a single, £800 for a double, £900 for a king and £1,000 for a super king.

So how good is a Casper mattress?

It's fair to say that over the last few years, Casper has led a revolution in the way we buy mattresses. No more self-consciously lying on a bunch of beds in a showroom while a salesperson hovers nearby. Simply order this bed-in-a-box mattress online for significantly less than you'd pay in a shop, and it'll turn up compressed into a surprisingly small box, ready to unpack. If you don't get on with your new Casper mattress, you can simply return it up to 100 days later.

Casper mattresses are made using memory foam, but boast a smart design to provide maximum comfort and support. Every Casper mattress contains four different layers of foam, each one doing a different job. The springy, breathable, open-cell top layer keeps you cool and gives the mattress some bounce, leaving you feeling perfectly supported and practically weightless; while the layers beneath provide more support, even weight distribution and better spine alignment.

The end result is a mattress that's neither uncomfortably firm nor unpleasantly soft. It helps maintain an optimum sleeping temperature – and should provide you with years of quality sleep. Be aware, though, that once you unpack it, your Caspar mattress will take a while to decompress – up to 10 hours, so think ahead if you're planning on settling down for a good night's sleep the first day you have it.

Casper mattress price: how much do they cost?

It's a fact of life that mattresses don't come cheap. Do a bit of research, though, and you'll find that Casper mattresses are priced pretty reasonably compared with other brands. The most popular – The Casper mattress – costs £375 for a single at full RRP; for a double, it's £575. If you need a king size mattress, it'll cost you £650, while an extravagant super king is £750.

Remember, though, that you can almost always find some kind of discount on these Casper mattress prices. And if it's all still a bit too rich for you then bear in mind that Casper has recently launched its new Essential mattress, with only two layers of memory foam, starting at just £275 for the single model and going up to £550 for a super king. Bargain.

If you were to head to the Casper site and simply order a mattress at list price, you'd be getting a pretty good deal: it's a very good mattress and the RRP is competitively priced. But it's almost criminally easy to find yourself a Casper mattress coupon, discount or promo code that'll knock a healthy chunk off the asking price.

One of the best times of the year to bag a brilliant Casper mattress discount is Black Friday (more on that below). But you'll find great deals all year round – so if you need a new mattress now, there's no need to wait. We see good offers at Christmas and in the January sales; in March, when retailers look to sell off older stock; on Amazon Prime Day in July; and in the summer sales too. Most months, you'll find a Casper mattress deal that cuts the price by at least 15%...

Casper doesn’t just make award-winning mattresses. The company also has a range of products to help boost the quality of your sleep, from soft but supportive pillows through to duvets, sheets, bed frames and more. You’ll often find deals on these too.

Casper Mattress Protector from £75
Once you've invested in a Casper mattress you'll want to keep it in pristine condition, and Casper has just the thing for that in the form of its own mattress protector. Made of the same material you'll find in serious outdoor gear, it'll protect your mattress from dirt and spills, and it's fully breathable. Everything-proof your mattress from £75 at Casper.View Deal

Casper Pillow: £60
When you're getting all this support from your Casper mattress, why ruin things with a nasty old pillow? The Casper pillow uses a pillow-in-pillow design that's made to give you all the orthopaedic support you need, with a microfiber inner pillow surrounded by an outer pillow to give you plenty of cushioning. View Deal

Casper Duvet: from £190
There's more to Casper's new duvet than meets the eye. It has a traditional down filling that's surrounded by a thin outer layer of merino wool, which is a great insulator as well as being moisture-absorbent and odour-resistant. And it's designed to stay fluffy, no matter how much you toss and turn in the night.View Deal

Casper Sheets: from £40
Treat your Casper mattress (and yourself) to Casper's own sheet, duvet covers and pillowcases are made from extra-long staple cotton, which is stronger and softer than the usual cotton thread, so they won't pill or wear thin, and Casper says that they'll get softer with every wash. They come in a lightweight percale weave that breathes better than the average cotton, and they come in white or white and slate.View Deal

Casper Adjustable Base: from £550
For picky sleepers who aren't happy with lying flat all the time, the Casper Adjustable Base is just the thing for getting your bed in exactly the shape you want. Its remote control enables you to raise your head or feet to exactly the level you need, which also makes it perfect for lazy days in bed watching TV.View Deal

Casper Platform Bed: from £900
If you're set on a Casper mattress, you should check that your existing bed frame can support it properly; slatted build might not be up to the job as it really needs a flat surface. So why not get rid of your old bed and replace it with Casper's own? It's designed to give optimal support for your mattress, and it's available in white or slateView Deal

Casper Glow Light: £89 or £169 for two
Switching the light off at night can confuse your brain and make it hard to get to sleep. Casper's Glow Light helps you nod off by dimming gradually at bedtime, it's portable so you can take it with you if you need to get up in the night, and it'll gently wake you up in the morning with soft light. Get £10 off a double Glow Light at Casper now.View Deal

Casper Nightstand: £200
Designed to match your Casper platform bed and headboard, the Casper nightstand is the smart way to deal with bedroom clutter. It features a sliding tray for easy storage, and it even has a notch in the back for cables, so you can charge your phone with easy cord management. Best of all, there's no assembly required.

Casper Dog Bed: from £115
Why should humans have all the fun? Now your four-legged friend can get in on the action with its own Casper dog bed. It's made out of the same memory foam as Casper's mattresses, it has thick raised edges so your pupper will feel secure, and has an incredibly durable cover that'll resist the attentions of the most destructive pooch.View Deal