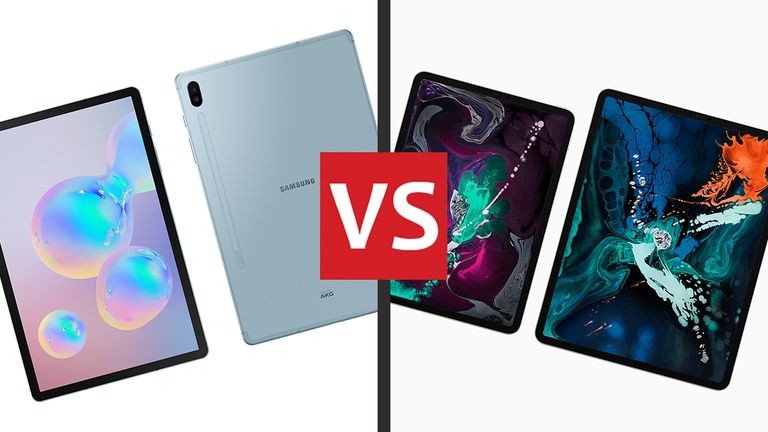 If you're in the market for the best tablet on the market at the moment, then both the iPad Pro from Apple and the Galaxy Tab S6 from Samsung have to be somewhere near the top of your shortlist: they represent the best of Apple tablets and Android tablets, respectively.

They're both fantastic tablets, no doubt about that, but how do they stack up against each other? Which one is going to be the right buy for you? To help you in that decision-making process, we're compared the two devices against each other in all of the important areas.

You don't get to the top of the tablet tree without some very nice aesthetics going on, and both the iPad Pro and the Galaxy S6 have got them in abundance: look at the slim form factors, the gently curved corners, and the thin bezels on both these tablets. They're actually quite similar in terms of looks, though admittedly manufacturers only have so many options when it comes to making tablets.

If we had to give out a prize for the best design, we think the iPad Pro would just edge it – available in 11-inch and 12.9-inch sizes, it's just 5.9mm (0.23 inches) thick, and almost impossible to fault in terms of its design (that camera bump is a bit of a nuisance, but never mind). You can pick up Apple's stylish tablet in silver or space grey.

The Samsung Galaxy Tab S6 certainly isn't far behind in terms of its looks. You get a 10.5-inch screen here, just one choice of size, and the tablet comes in with a thickness of 5.7mm (0.22 inches). You do get a few more colour options if you go with the Samsung tablet though: it's available in gray, blue, or what Samsung calls "rose blush".

Both the Samsung Galaxy Tab S6 and the Apple iPad Pro are absolutely packed with power – they're going to cope with everything you want to do on Android or iPadOS, even if it's running the most intensive mobile games or doing some video editing. Apple does have a slight advantage here though, in that it develops its hardware and software together, whereas Samsung is working in partnership with Google and Android. It's worth mentioning too that both tablets come with cellular options.

The Samsung Galaxy Tab S6 comes with a Snapdragon 855 processor under the hood – the same flagship Qualcomm processor that's powering many of the best Android phones in 2019 – and that's paired with either 6GB or 8GB of RAM, and either 128GB or 256GB of internal storage (expandable via microSD card), depending on how much you want to spend on your tablet.

The iPad Pro, on the other hand, uses Apple's own A12X chipset – faster than the iPhone XS then – and comes with either 4GB or 6GB of RAM depending on the model you pick. Your internal storage options are 64GB, 256GB, 512GB or 1TB, but you can't expand on that with a memory card as you can with the Samsung tablet.

One of the big choices you have to make here is between Android (the Tab S6) and iPadOS (the iPad Pro) – we don't have the space here to go into a full comparison, but you probably already know which one you prefer. Looking at it objectively, it's probably fair to say iPadOS is the more powerful tablet operating system, though Android still beats it in certain areas (like customisation options).

Both of these tablets come with stylus support as well of course, for the Apple Pencil (iPad Pro) and the Samsung S Pen (Galaxy Tab S6), and both have official clip-on keyboards available too. In terms of battery life, the Samsung tablet features a 7,040mAh battery, which Samsung says will last up to 15 hours; the iPad Pros have 7,812mAh or 9,720mAh batteries, depending on the model, which should see you up to 10 hours of normal use.

Both these tablets look great, offer fantastic levels of power, and have stylus and keyboard accessories to turn them into creativity tools or makeshift laptops. We're not exaggerating when we say that for many people, the choice between these tablets is really going to come down to whether they prefer Android or iPadOS.

There's also the whole surrounding ecosystem to think about as well – Samsung is the better option if you're more invested in Google (or indeed Samsung) apps and services, whereas the iPad Pro makes more sense if you've already got a ton of Apple hardware lying around the house.

Price has to be a factor as well – the latest deals can be viewed in the widgets on this page – and while the price you pay depends on the offers of the moment and the configuration you go for, we can tell you at the time of writing the Galaxy Tab S6 starts at £619 straight from Samsung, and the iPad Pro starts at £769. That's quite a difference, but overall these slates are very hard to split.