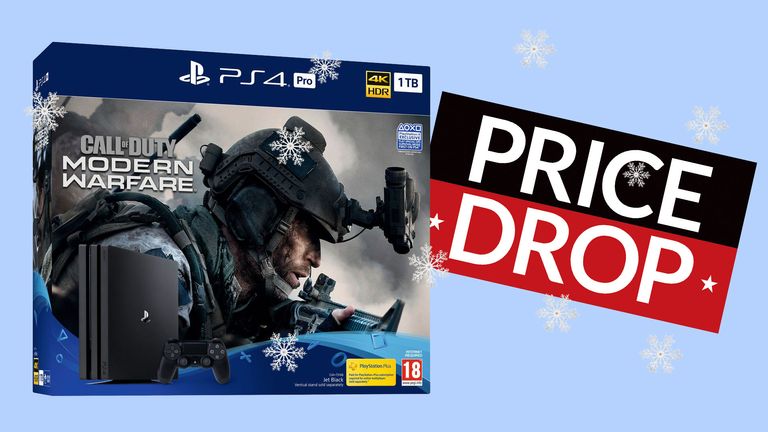 T3 was blown away by the PS4 Pro when we reviewed it last year and since then it has been a centrepiece in our gaming and entertainment setup.

The price of Sony's 4K, HDR pixel-pushing powerhouse has remained pretty resolute though over the last 12 months, with just the console on its own remaining locked at near £350. But thanks to Currys' great Christmas deals,  you can now score a PS4 Pro with 1TB storage with the massively popular Call of Duty: Modern Warfare for a remarkable £249.

This is one of the cheapest PS4 Pro deals bundled with a new game we've ever seen. For the same price as the regular 500GB console, you're getting 4K gaming, top-tier upgrades, double the storage and even a subscription to Spotify Premium thrown in. That is incredible value. Check it out below:

PS4 Pro 1TB with Call of Duty: Modern Warfare | was £349 | now £249 at Currys
Save on the top-of-the-line PS4 Pro and one of the year's hottest games. The PS4 Pro allows you to game in 4K with a high dynamic range, ensuring you've got a crystal-clear, gorgeous-looking game every time. It's a smart home hub too, with access to lots of different apps including Spotify, Netflix, Amazon Prime and of course the PlayStation store. Get six months of Spotify Premium and Call of Duty: Modern Warfare thrown in absolutely free. View Deal

Naturally, discounted units are limited so we advise you to move fast if you are currently in the market for a PS4 Pro in time for Christmas.

There's even more goodies on offer here. As a gift to all its Christmas shoppers, Currys is offering a £5 gift voucher with every purchase, and the opportunity to win a giftcard worth up to £1,000. Check out the full terms and conditions here. Good luck!

If you want a second look at what you get in the PS4 Pro box, then why not watch T3's PS4 Pro unboxing video below?