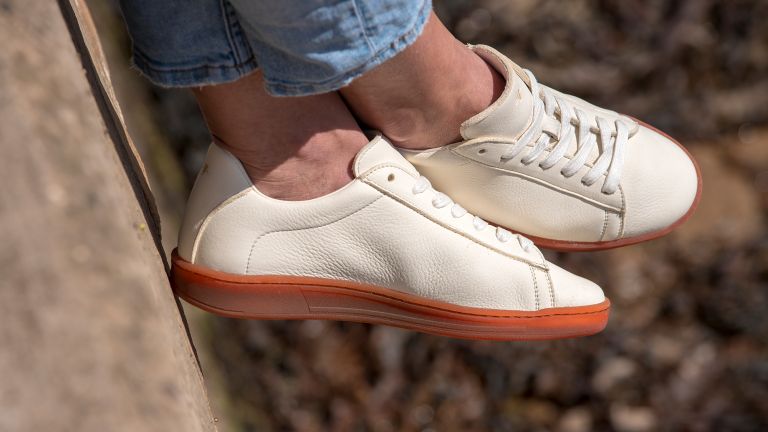 We all know more than even about the environmental impact of travel and the food industry, but have you ever thought about your clothing and shoes?

Devon and Porto-based Edward Temperley and Damian Quinn have. The co-founders of WAES have created a trainer which is 100% biodegradable, carbon neutral and contains zero plastic.

The company claims full supply chain transparency, and prices though the Kickstarter campaign start at £96, with the lower £84 tier already sold out.

According to WAES, each year the global footwear industry produces over 20 billion pairs of shoes which contain plastic and are impossible to recycle. The startup claims 99% of shoe soles are non-recyclable.

The WAES biodegradable shoes are made in Portugal, where the startup claims to have “repurposed an artisan production technology” to produce the soles of its sneakers. This process uses sustainably-sourced sap from rubber trees grown in Forest Stewardship Council-certified plantations in South East Asia.

The uppers of the shoes are made from organic cotton and organic-tanned Italian leather. These uppers are free of metal, with no toxic coatings or fixatives, while the stitching is made from hemp, flax and cotton, the resin is vegan conifer glue, and the packaging is FSC-certified and reusable.

One mangrove tree will be planted for every pair of shoes purchased.

The shoes are available in two different styles, called Hope and Chameleon, and each of these is offered in black or white, with three colours of sole (tan, red and black) available for each. WAES says orders placed through Kickstart now will begin shipping in December this year, and there are multi-buy deals for those who want more than one pair.

UK sizes range from two to 10 for women and five to 12 for men, or 35 to 46 in Europe. Only a small number of shoes are available via Kickstarter at launch, with the cheapest tier already sold out. The campaign has raised over £32,000, surpassing its £20,000 target, and runs until 11 November.

As well as neutralising the environmental impact of their production, WAES' lack of plastic means no microplastics are shedded from the shoes as they are worn.

According to microplastics research conducted in 2018 by The Fraunhofer Institute for Environmental, Safety and Energy Technology, abrasive shoe soles are the seventh most common source of microplastics. These are particles of plastic measuring 5mm or less, and according to the report 109g of microplastics are passed into the environment from each person’s shoes every year.