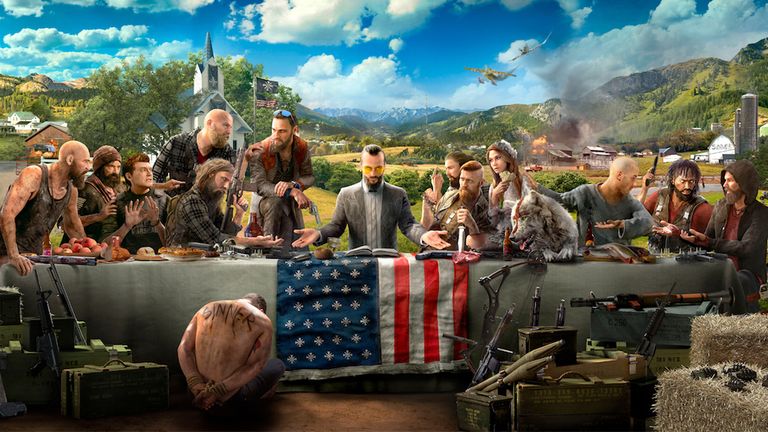 So what are the best Xbox One game deals this week? Well, we've tracked down the latest and greatest prices for the chart's most popular Xbox One games on Microsoft's console for you.

The variety of Xbox One games is excellent this week. We're talking about setting sail to pillage and plunder the Caribbean in Sea of Thieves. Or maybe you'd prefer finding out just why everyone's been talking about the new Battle Royale craze by dipping a tentative toe into PlayerUnknown's Battlegrounds? If you just want to explore the forests and hills of Montana with your dog while picking off members of a a doomsday cult, then Far Cry 5 is the shooter of the month for you.

Whatever takes your fancy, we're here to track down the cheapest Xbox One game prices. And if you've been eyeing up the 4K powerhouse that is the Xbox One X, we've got one hell of a bundle for you with four cracking games.

Far Cry 5 is the best-selling Xbox One title right now and we're not surprised given how excited we've all been to dive into the fictional world of Hope County, Montana. Open world first-person shooters can be tricky to pull off, but Ubisoft has another winner on its hands here with a solid metascore of 82. You're tasked with freeing the locals from the madness of the 'Project at Eden's Gate' doomsday cult, but you know the deal, it's Far Cry, you're going to spend more time sneaking around doing side missions, especially with your dog and bear pals. That's right, you can basically enlist a bear. This is exactly the sort of great outdoors game to keep you indoors until Red Dead Redemption 2 arrives later this year.

Fortnite might be the Battle Royale shooter dominating XBL right now, but there's still a huge audience picking up PlayerUnknown's Battlgrounds, or PUBG as the kids are calling it. PUBG did popularise the genre first to be fair with its take on the 1vs100, no respawns deathmatch. It's still technically an unfinished, in-progress, Early Access game on Xbox One, but by picking it up on the cheap here (and it's very cheap for such a popular new game) you're granted access to the final version and all the updates and new maps along the way.

Ending a bit of a dry spell for Xbox exclusives, Sea of Thieves is an absolute blast in multiplayer. This always-online 'shared world experience' is the pirate adventure we've been waiting for since Assassin's Creed IV made pirates and the high seas cool again. It hasn't set metacritic aflame though with a current score of 69. If you enjoy team-based gameplay though, there's much fun to be had engaging in naval battles at sea and heading ashore to find buried booty while looking out for AI skeletons or ambushes from rival players. Oh, and you might want to keep an eye out (if you still have two), for ol' beasty himself, the Kraken.

Xbox One X bundle of the week

Xbox One X | Far Cry 5 | Player Unknown's Battlegrounds | Halo 5 | Gears of War: Ultimate Edition | £429.99 at Very
Don't be a fool! That's what we say to people paying £450 on the Xbox One X on its own. Wait a short while and there's always a smarter Xbox One X bundle around the corner like this sweet four game deal from Very. Recent bundles have tended to only have one game with the 4K console for £450, so getting four and only paying £429.99 sounds like a winner to us.View Deal

More about Xbox One X