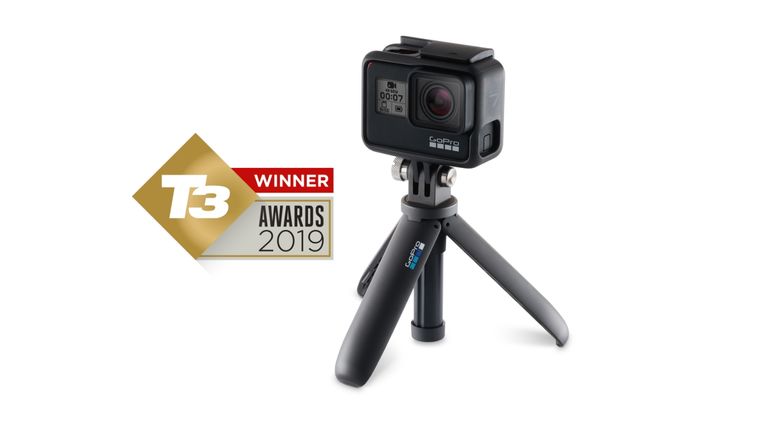 When GoPro launched the flagship Hero7 Black action camera in September 2018, it was rightfully hailed as a game changer. The quality of the stabilised 4K60fps video alone is enough to earn it this coveted T3 Award 2019, but there is so much more to explore...

Rather than attempt to boost the video resolution of the already impressive Hero6 Black model, for the Hero7 Black GoPro focused on making footage even smoother. GoPro's HyperSmooth technology is genuinely groundbreaking, adding amazing, buttery smooth stability to any activity. What’s more, the gimbal-free solution works at most resolutions up to and including 4K60, as well as underwater.

But that’s not all... Another exciting feature is TimeWarp, a neat mode that enables you to shoot moving timelapse videos, aided by that excellent HyperSmooth image stabilisation. The results are pretty spectacular and make slick creative additions to any action edit or vlog.

The touchscreen on the rear of the action cam is slick and responsive, and the menus have been refined and restructured to make it quicker and easier to set up and start shooting. The camera also boasts the now ubiquitous (to GoPro, at least) voice control for any action scenario where the camera is physically out of reach.

If you’re the sort of adrenaline-seeker GoPro’s aiming at, it’s likely you’ll be keen to upload or share your footage online to prove what a badass you are. The Hero7 Black has the ability to live stream your antics, so there’s no need to wait until the excitement is over to upload or edit your videos.

Elsewhere, the usual GoPro features are present and correct: this super-rugged camera is waterproof to 10-metres, or 30-metres with an add-on case. There are mounts for everything, and the camera is capable of superb slow motion capture too (up to 8x in this case). To cap it off, the Hero7 Black can shoot superb HDR stills.

If you live life on the edge, this is the only camera you need to capture it.

Check out more of this year's award winners on our main T3 Awards 2019 page.

GoPro HERO7 Black - The...
GoPro Hero7 Black
Amazon
£289.95
View
See all prices
We check over 130 million products every day for the best prices
View All Deals