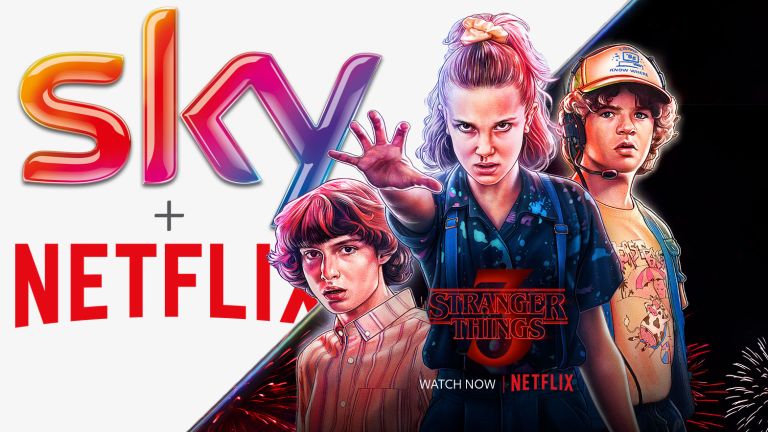 If you've been jealously listening to friends and colleagues excitedly talk about must-binge box sets like Stranger Things, Chernobyl, Game Of Thrones, Queer Eye, and Big Little Lies – Sky TV has unleashed an astonishing new deal that bundles Sky Q with its popular Entertainment package and a full Netflix subscription for £25 a month

For comparison, Sky typically charges £22 a month for the Entertainment bundle alone, with its Ultimate On-Demand add-on – which includes the Netflix subscription – setting you back an extra £12 a month.

With this latest offer you'll save yourself £9 a month – or a total of £162 over the course of the minimum 18-month contract. That's a hefty saving. Unfortunately, the deal is only around until tomorrow, Thursday July 25, 2019. So, if you're looking for a way to cut-down the amount you spend on on-demand subscriptions and telly, it's worth adding this fantastic bundle to your basket sooner rather than later.

You'll also be getting a truck load of entertainment. Not only will you get the flagship Sky Q set-top box, which has the next-generation remote that connects via Bluetooth and has an in-built speaker that plays a beep to help you track it down if it ever gets lost down the back of the sofa. You'll also get 300 live channels, 40 catch-up channels, 500 Box Sets to watch on-demand on Sky TV, and a Netflix membership.

Sky added the ability to stream Netflix on the Sky Q set-top box last year, so you'll be able to watch Netflix movies and box sets on the TV without fiddling with HDMI inputs, switching apps, and all the usual palaver. You'll still be able to download the standard Netflix app to stream on-the-go on your phone and tablet, too.

Sky Q + Entertainment bundle + Ultimate On Demand | Was , now £25 a month for 18-months
If you're short on things to watch this summer, this new blockbuster deal from Sky has got you covered. Not only do you get access to 500 on-demand box sets from Sky, 300 live channels, and 40 catch-up services, but you'll also get a full Netflix subscription.
Deal ends Thursday July 25, 2019View Deal

Sky Q is our favourite television service on the market right now, picking up a gong at the 2019 T3 Awards. Why did it get the gold medal? Well, for a start it's the market leader in content, with the game-changing ability to enjoy programming in  UHD 4K, HDR, as well as some excellent audio credentials with the help of Sky Soundbox.

You're also getting an entertainment hub that supports voice search, Dolby Atmos, a dynamic and super easy to use UI, and so much more.

Seriously, there is no end to the Sky Q tips and tricks. Oh, and it doesn't stop there. You can even use your impressively talented Sky Q box to draw in a Netflix account as well, giving you access to another vast library of high-definition content.