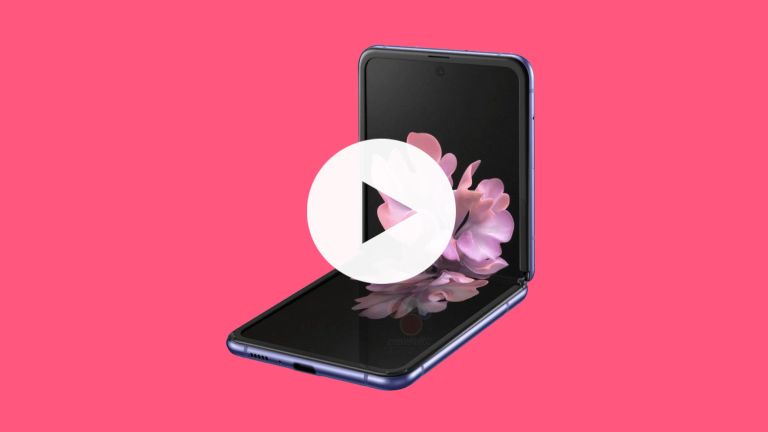 Samsung Galaxy Z Flip was unveiled yesterday, without warning, via a television advert played during the Oscars.

Due to be unveiled tomorrow at the Samsung Galaxy Unpacked event in San Francisco, the Korean manufacturer chose to advertise the event itself during the star-studded ceremony, placing the Z Flip front and centre with the tagline "change the shape of the future".

The glossy ad places the emphasis firmly on the phone's clamshell folding technology, and showcases the phone in two colourways previously spotted in leaked renders: black and purple.

It also shows off the small display on the outside of the phone, designed to show not only the time, date and notification symbols, but also who's calling. You can unfold the Gameboy Advance SP-lookalike to answer the call, or slide across the display to reject it without opening.

However, it's the small print in the ad that's got our attention. Check out the ad below and see if you can spot it:

The ad's small print claims "You may notice a small crease in the centre of the main screen, which is a natural characteristic of the screen.” So just like the Samsung Galaxy Fold, the Z Flip will have a noticeable seam along the folding section of the screen.

This does give us cause for concern. The Samsung Galaxy Fold's troubled release was largely due to the fragility of the phone caused by the folding mechanism. Rumours of creaky hinges have plagued the Z Flip in recent days, and if the Z Flip inherits the same troubles as its predecessor, Samsung could have a bad time.

With the Samsung Galaxy Z Flip being pitched as a direct rival to that other folding clamshell, the Motorola Razr, any errors in the folding technology of either phone will be crucial in giving the other an upper hand. However, if both phones exhibit similar faults, users might reject further foldables later down the line.

Either way, we won't know how drastic the issues might be until we have the phone in our hands, and it all starts at tomorrow's Samsung Galaxy Unpacked.