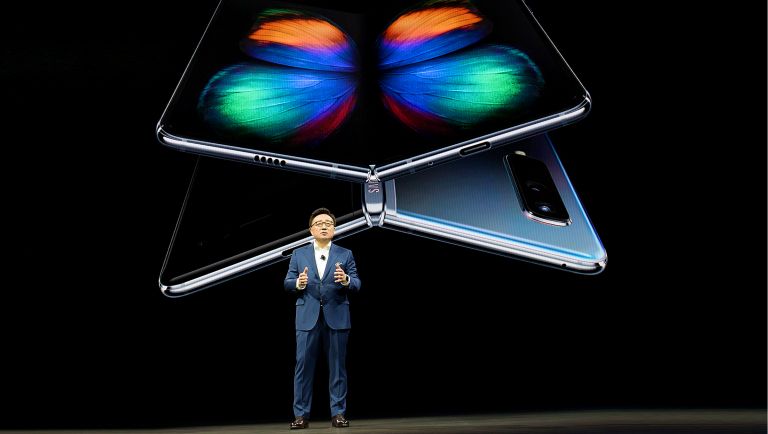 The first-generation Galaxy Fold hasn't hit store shelves yet, and already eyes are turning towards a future version of the flexible flagship phone. And it looks like Samsung will really shake things up with the Galaxy Fold follow-up, which will presumably be branded as the Galaxy Fold 2.

Prolific tipster Ben Geskin has shared footage of a pliable OLED display with a horizontal fold, which allows the entire screen to fold in half like closing an envelope. This is a very different approach to the current Galaxy Fold, which has a vertical crease down the centre of its screen allowing it to open up like a paperback novel.

Samsung adopt the new approach, which is very reminiscent of the flip-phone design that was popular in the early noughties, for the 6.7-inch OLED that will be fitted inside the second-generation Galaxy Fold, technology blog ETnews reports. That's a little smaller than the 7.3-inch Infinity Flex screen inside the Galaxy Fold.

There are very different use cases for the two designs. While the Galaxy Fold is designed to unfurl into a larger device with a tablet-size display, the Galaxy Fold 2 would fold down into a much smaller package – with an emphasis on portability.

Unlike the first-generation hardware, there doesn't appear to be a secondary touchscreen to enable some basic functionality – such as answering calls, replying to text messages, following directions from an app – while the handset is closed.

According to sources speaking to ETnews, despite the ongoing delays around the Galaxy Fold (the company has purportedly fixed "most" of the issues that plagued the initial run of handsets), Samsung still plans to plough-on and expand its portfolio of foldable phones. It's unclear exactly when the Fold 2 is scheduled to launch, but a report from Korean-language trade publication TheElec claims Samsung is targeting an "early 2020" launch window for the next folding handset.

Unfortunately for Samsung, this innovative new folding mechanism might not look anywhere near as original as it does right now come next year. That's because the design is almost identical to the one planned by Motorola to relaunch its Razr brand.

Motorola confirmed plans to enter the foldable market in an interview with Engadget. In the unusually candid chat, the company confirmed that work is well underway on a handset with a folding display and that it has "no intention of coming later than everybody else in the market".

Based on schematics published with official patents from the company, the all-new 2019 Razr will have a foldable OLED display that runs the length of the handset when you flip open the device. While the rebooted Motorola Razr will still have a hinge, it'll be hidden from view by the display whenever you're using the smartphone. When the smartphone is open, it is expected to have an expansive screen with a widescreen aspect ratio so that you can watch the latest blockbusters without any of those troublesome black bars.

Of course, none of this is confirmed until Samsung and Motorola announce the finalised smartphones. Until then, it's worth taking everything with a pinch of salt.