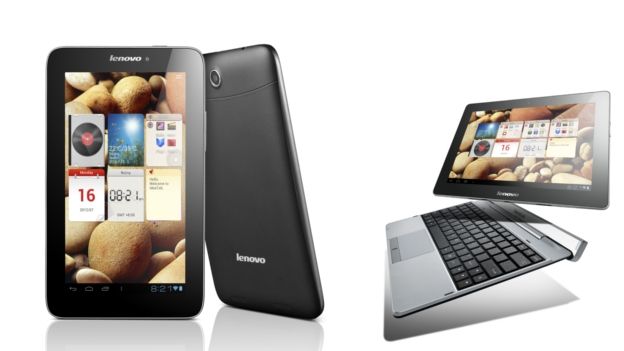 Lonovo has announced three new devices from its tablet portfolio: a high-end and two-mid-ranged slates complete with tricky numeric names

Lonovo announced three new tablets at the IFA show in Berlin today – the high-end Ideatab S2110A, as well as two mid-ranged slates, the A2107A and A2109A, all of which run on Google's Android 4.0 Ice Cream Sandwich operating system.

It's being billed as a “premium entertainment tablet” and comes equipped with a detachable keyboard, however, the firm has still managed to keep things thin (8.69mm) and light (580g).

The 10-inch tablet also sports a colour-rich 10-point multi-touch display, which is ideal for two-player gaming, and a Micro-HDMI port, so you can hook it up to your TV to view your money shots on the big box.

Also in the mix is an SD card reader, USB port, as well as a 5-megapixel rear-facing snapper complete with LED flash, 1GB of memory, Wi-Fi connectivity and a 1.3-megapixel front-facing snapper, ideal for Skype chats.

Despite being mid-range, both slates come equipped with the same metal alloy roll cage inspired by the firm's ThinkPad line.

Bookworms will love the 3G-enabled 7-inch A2107A, which is specifically designed for those who love reading.

But that's not all: it also sports two speakers, a micro-SD card, Bluetooth 4.0, built-in FM radio, 720p HD resolution and up to ten hours of active use – so you needn't worry about it running out of juice while your mid-way through 50 Shades of wa-hay!

In contrast, the A2109A model comes complete with a 9-inch, four-point capacitive display with a rich 1280x800 resolution.

It's a tad lighter than the high-end S2110A, but still manages to fit in a 3-megapixel rear-end snapper, dual microphones, 16GB of internal storage space, GPS, a Micro USB port and 1.3-megapixel front-facing camera.

Pricing and availability on all three devices will be announced in due course.