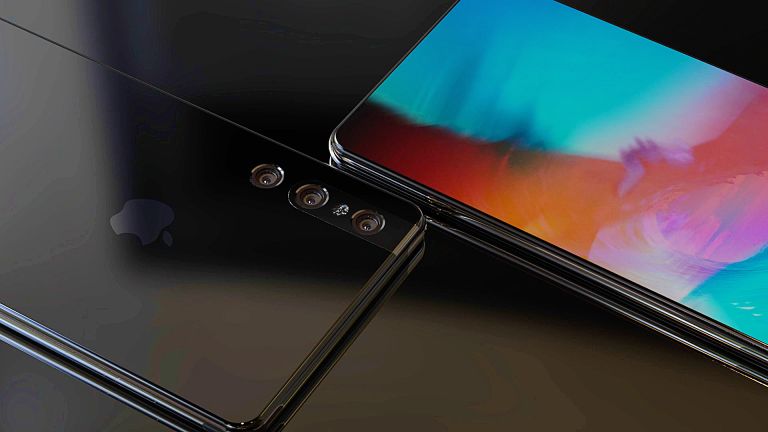 We've now got a pretty good idea of what the next iPhone to leave Sir Jony Ive's secretive design lab will look like. Leaks have revealed the controversial new triple-camera design, new wired fast-charger in the box, the same notched display design to enable Face ID and AniMoji, redesigned Taptic Engine, A13 system-on-a-chip, no 3D Touch pressure sensitive screen, and potentially, a very colourful logo.

So, there will be plenty for CEO Tim Cook and co. to shout about on-stage on September 10 during the announcement, but the new handset won't be the radical re-imagining that many were hoping for. Thankfully, prolific YouTube channel "Concept Creator" has shared a vision of what the follow-up to the iPhone 11 could look like – if Apple decided to really shake things up.

Watch the video on YouTube, or in the embedded video player below:

There is a lot to unpack in this video. First of all, YouTuber "Concept Creator" has decided to ditch the curvaceous notch at the top of the display that has become something of a calling card for every iPhone launched since the iPhone X.

Unlike the much-rumoured triple-camera coming to the iPhone 11 series, the new video suggests that Apple could add the third lens beneath a vertically-aligned row down the left hand-side of the back of the handset – keeping roughly the same alignment seen on the iPhone XS and iPhone XS Max.

There's also little detailing around two of the lens, similar to the thin band of glass used along the top and bottom of the rear panel on the iPhone 5 and iPhone 5S.

Interestingly there are no physical buttons on the handset – something that Samsung was hoping to achieve with the industrial of the Galaxy Note 10, but ditched because it didn't pass its rigorous internal testing process. Android smartphone rival LG is also planning to use a similarly button-less design.

Given that "Concept Creator" suggests the handset in this video could support 6G, it's clear this design is a long way off. Apple used to dramatically refresh the industrial design of its iPhones every two years – after a new numbered release and the subsequent "S" update the following year. However, that schedule has slowed over the last few years, with the iPhone 7 and iPhone 8 keeping almost all of the same exterior as the iPhone 6, which launched three years earlier.

With the iPhone X, iPhone XS, and upcoming iPhone 11, it seems Apple may be taking a similar approach. So, don't hold your breath if you like what you see in this new video.