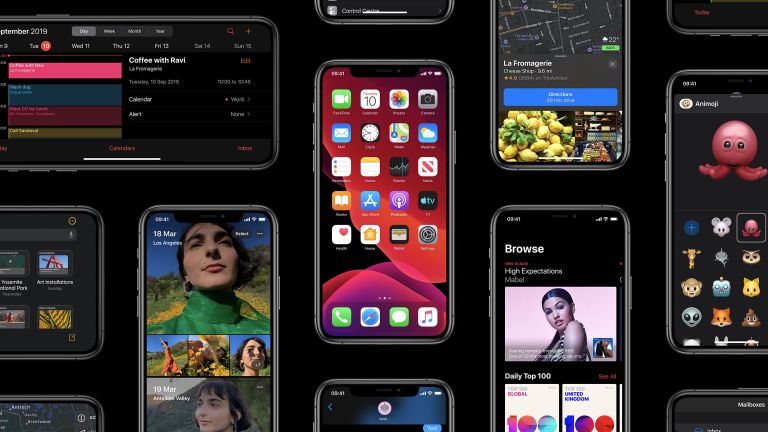 Apps will load twice as fast on your current iPhone after the free upgrade to the new iOS 13 mobile operating system, Apple assured us when it introduced the software during its Worldwide Developer Conference in San Jose earlier this summer.

Following the announcement of the iPhone 11, iPhone 11 Pro, new entry-level iPad and Apple Watch Series 5 at its annual September launch event, Apple confirmed that it will roll-out iOS 13 on September 19, 2019 – the day before the new handsets start to surface on Apple Store shelves worldwide.

Apple says it has changed the way it packages the apps within the App Store, shrinking app packages by 50%. App updates are now 60% smaller, too. If your iPhone is constantly pinging you with warnings about being low on storage, this upgrade should be music to your ears – since these svelte new app packages should free-up space for your photos, or offline Netflix downloads for long journeys.

But iOS 13 isn't just about behind-the-scenes tweaks and speed boosts. The new mobile operating system, which will go toe-to-toe with Google's arch-rival Android 10, also ships with a slew of user-facing features, including the ability to swipe to type on the default iOS keyboard, lyrics that are highlighted in-time to the track on Apple Music, per-website preferences on Safari, new formatting options in Mail, shared folders in Notes, to name just a few.

There's also a system-wide Dark Mode, which swaps interface elements that are usually white to darker shades. This should make iOS a little easier on your eyes whenever you're working late. It'll also save battery power on OLED displays. Apple has updated its iOS apps to support the new Dark Mode. However, it could take a little time for third-party developers to add support for the feature to their app.

Another massive focus for iOS 13 is privacy. Apple has implemented an array of new features to keep its users data out of the reach of nefarious developers. In iOS 13, Apple will allow developed to include a "Sign-In With Apple" option in their apps – designed to replaced the "Sign-In With Facebook" and  "Sign-In With Google" buttons that are already commonplace in iOS apps.

Clicking on the "Sign-In With Apple" button authenticates with Face ID or Touch ID and starts a new account "without revealing any personal information". Users can choose to share the email address associated with their iCloud account.

However, if you'd rather not share your data with whatever app you've downloaded, Apple will generate a random address that forwards to your real email – without the app ever being aware that it's been tricked out of your actual data.

Apple can generate a separate email for every app, if you choose to hide your details. This will also work across your iPad and Mac. We can't help but think that Google and Facebook won't be happy with this particular announcement.

On the subject of privacy, Apple has updated its settings to allow much greater control over how users location data is shared with third-party apps, including a new one-time option – so you can temporarily enable a feature that requires location, without giving it carte blanche with your location. Apple now reveals when apps have been quietly sneaking at look at your current location in the background.

Elsewhere, Memoji is getting a pretty significant upgrade in iOS 13, too. There are a number of new customisation options, including ear rings, lipstick shades, hats, and even accessories like Apple AirPods. Memoji are no longer exclusive to the iPhone X, iPhone XS, iPhone XS Max and iPhone XR. Starting with iOS 13, the ability to create and edit Memoji will roll-out to any iOS device with an A9 processor or newer.

Coincidentally, iOS 13 only runs on iPhone 6S, 6S Plus or newer. Since these were the first Apple smartphones to ship with an Apple A9 chipset, any handset that can upgrade to the new operating system in September will be able to take advantage of the new Memoji features – so expect to see a truck load of these animated characters from your iOS-touting friends and relatives.

In iOS 13, whenever you create a new Memoji, Apple will automatically create a series of stickers to send within iMessage and react to a wide variety of different situations. Like before, only iPhone models that support Face ID will let users animate their Memoji by talking or (more likely) gurning at their phone, but any iOS device powered by an A9 chip will be able to send stickers. That makes this a serious competitor to the likes of Snapchat's Bitmoji for the first time.

Apple wants to bring an end to those indistinct grey bubble in the Messages app with the launch of iOS 13. Messages will now automatically include a name and photo (or customised Memoji) to easily identify who is who in your Messages threads.

Photo editing also gets a boost in iOS 13, with a number of new tools, including the ability to sharpen, reduce noise, change the white balance, and add a vignette. Apple has also overhauled the user interface – with the sliders of yore completely gone.

For the first time, iOS will support video editing, too. Everything can be tweaked in photos can now be done to videos, too. That means that – for the first time since the launch of iOS in 2007 – you'll be able to rotate videos.

The Photos app also gets a lick of paint and now uses on-device machine learning to curates your entire photo collection to highlight the best images, automatically hiding duplicates. Auto play videos also appear as you scroll through your memories, so you don't have to tap into a clip to relive a particular moment.

In iOS 13, Portrait Lighting adjustments can be made within the Camera app to virtually move the light source closer to the subject – sharpening eyes and brightening and smoothing facial features – or push the software-generated light further away to create a subtle, refined look. A brand-new "High-Key Mono" effect creates a beautiful, monochromatic look for Portrait mode photos.

Apple Senior Vice President of Software Engineering Craig Federighi said: "iOS 13 brings new capabilities to the apps you use every day, with rich updates to Photos and Maps, and privacy-protecting features like Sign In with Apple, all while delivering faster performance.

"We’re excited for customers to experience what’s coming to iPhone this fall and can’t wait for them to see how great everything looks in Dark Mode."

iOS 13 will roll-out September 19, 2019. If Apple follows a similar launch schedule to previous years, it will begin around 10am in Cupertino, which around 1pm in New York, and 6pm in the UK. It can be difficult to download the new operating system the second it goes live as there is a huge surge of demand on Apple's servers.

iOS 13 is compatible with iPhone 6s and newer. That means the iPhone 6, iPhone 6 Plus, and iPhone 5S are no longer getting the latest features after getting the bump to iOS 12 last year and will probably need to upgrade...