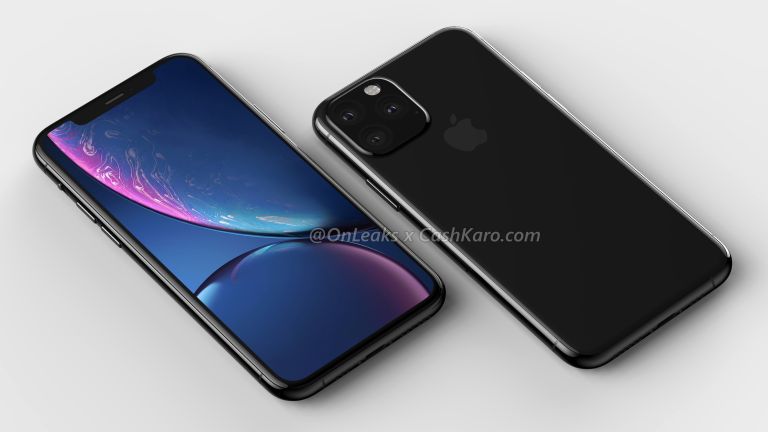 Apple is busy working on the next entry into its best-selling iPhone line-up, which is rumoured to be called iPhone 11, or iPhone XI (the "X" in "iPhone X" and "iPhone XS" is the Roman numeral for 10, not the letter X – although confusingly, the "S" in "XS" is very much just an "S"). The new handset is widely-rumoured to keep the same overall design as the previous two outings: so expect a wide, curvaceous notch at the top of the screen to house the facial recognition Face ID system, the same edge-to-edge 5.8-inch and 6.5-inch screen sizes, and stainless steel band.

Provided Apple sticks with its typical launch schedule, we expect to see the new handset unveiled on-stage at the Cupertino headquarters in early September. But ahead of the launch, serial tipster @OnLeaks has purportedly revealed the final design. The leak, published in collaboration with CashKaro, is based on a number of CAD models, which are used during the manufacturing process to map out the dimensions and provide third-party accessory designers with the design ahead of the release date, seen by @Onleaks. Previous leaks unveiled by the tipster using the same technique have proved to be extremely reliable.

Based on the high-resolution renders, Apple looks set to use a square camera bump that sits higher than the rest of the rear case. Since the iPhone X, Apple has housed its multi-camera systems in an oblong bump in the top left-hand corner of the rear panel. Based on these renders, the placement on the back plate will be identical.

Like the Samsung Galaxy S10, Huawei P30, upcoming OnePlus 7, and a raft of other flagship smartphones, Apple looks set to move to triple-camera system. The dual-camera on the iPhone XS and iPhone XS Max is used for 2x lossless optical zoom and Portrait Mode images with adjustable, artificial bokeh-style blur.

Apple could use a third lens to bring as greater level of zoom, like the Oppo Reno and Huawei P30 Pro, which both sport lossless 10x zoom capabilities. Equally, it's possible the company will opt to add an ultra-wide angle camera instead, like those seen on the Samsung Galaxy S10e, and LG G8 ThinQ.

Rather than line-up all three cameras, like the current iPhone models, the CAD models seen by @OnLeaks reveal that Apple plans a triangle-like arrangement. This is a pretty wacky idea – especially from a company that has previously ensured that every screw, antenna line and hole in the speaker grill are perfectly aligned.

In the article with the high-resolution renders, blog CashKaro describes the design as a "weird arrangement which already has the Appleholics biting their nails."

Whether customers will be able to stomach the asymmetrical design in order to get the benefits of a triple-camera on their new iPhone remains to be seen. Elsewhere, the next iPhone is expected to ship with improved Face ID, and faster internals. One feature that definitely won't be coming to the 2019 iPhone models? 5G support.

Finally, one teensie tweak you might've spotted in the renders is the mute slider, which appears to be a smaller, round switch that slides horizontally to toggle the silent mode. This design is very similar to the mute switch found on iPads, rather than the flat switch which we've seen on every iPhone released to date.