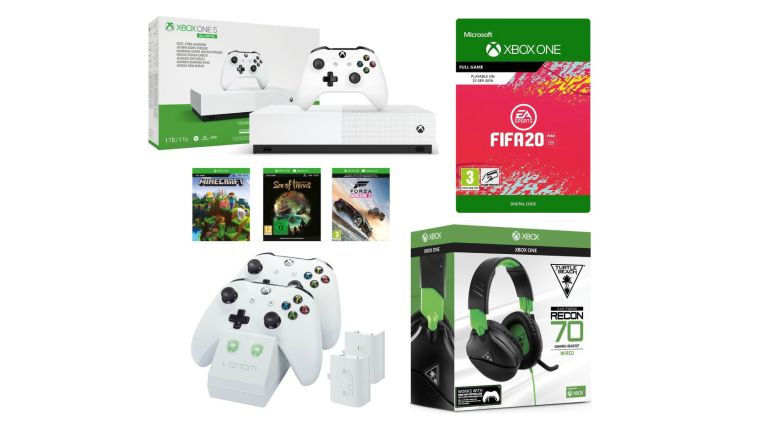 T3 knows a good Xbox deal when it sees one, as we spend every week of the year looking for the absolute best Xbox One S deals and best Xbox One X deals, so we can get the top gaming hardware into as many gamers' hands as possible.

And this is why when we saw this incredible Xbox One S All-Digital Edition bundle deal over at Currys we moved immediately to bring it to your attention. This is because, simply put, it delivers one of the most complete Xbox One setups we've ever seen in one single deal package.

You not only get the 1TB Xbox One S All-Digital Edition console, but you also get four top games including FIFA 20, a top-rated Turtle Beach gaming headset, a stylish controller docking station, and a subscription to Xbox Live Gold.

And the crackers thing is that it does it for an incredibly approachable price point.

Xbox One S All-Digital Edition + FIFA 20 + Forza Horizon 3 + Sea of Thieves + Minecraft + Turtle Beach Recon 70X Gaming Headset + Twin Docking Station + Xbox Live Gold | £189 at Currys
This deal just speaks for itself and, in terms of gaming deals, is the most value-stuffed that we've seen all year. For just £189 you can pick up this insanely good Xbox One S All-Digital Edition mega deal. It is so good as on top of getting the 1TB console, you also get four top games, including the brand spanking new FIFA 20, as well quality gaming headset and twin controller docking station. Oh, and if that wasn't enough, you also get a free 1-month subscription to Xbox Live Gold, too.View Deal

Like the idea of a great Xbox One S bundle deal but fancy a console with a disc-drive slot? Well, then it is absolutely worth then checking out this doozy of a deal, which scores you the 1TB Xbox One S along with FIFA 20, Gears of War 5, Tekken 7 and Project Cars 2 for only £199.

The trade-off here, though, is that you don't get the Turtle Beach Recon 70X gaming headset, Twin Docking Station, or Xbox Live Gold subscription. The full details of the deal can be viewed below:

These guides are stuffed with products that T3 recommends, with us impressed with their quality and ability to help deliver fantastic gaming experiences.

To see how both these awesome Xbox deals compare to prices on the consoles alone, consult the deal roundups below.