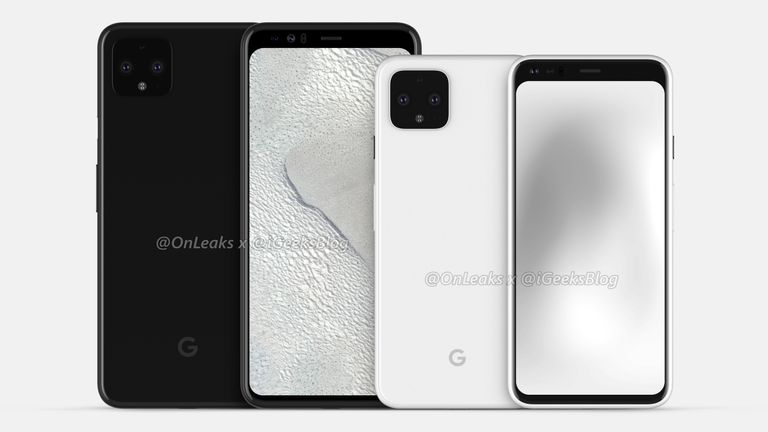 The flagship Google Pixel 3 series sports one of the greatest smartphone cameras money can buy, but sadly, it ships in a design that leaves quite a lot to be desired.

Many hoped that would change with the forthcoming fourth entry in the Google Pixel series, which is scheduled to launch in October – provided the Mountain View-based company sticks with its typical launch schedule. Although Google has already revealed the back of the phone, we're still in the dark about the front.

Some rumours pointed to a Samsung Galaxy S10-style hole-punch display that embeds the selfie camera into the screen to maximise the screen-to-body ratio.

However, the latest leak around the Google Pixel 4 suggests the new handset will stick with the same chunky, curvy bezels seen on the Pixel 2 XL and Pixel 3a. Serial tipster OnLeaks claims to have unmasked the final design of the Pixel 4 series, working in collaboration with iGeeksBlog.

The leakster has a solid track record when it comes to unannounced products as the information is always based on CAD models, which are used during the manufacturing process to map out the dimensions and provide third-party accessory designers with the design ahead of the release date. As such, the dimensions and designs are usually locked down – something that's not always the case with early prototypes pictured in blurry paparazzi-style images shared by other tipsters.

So, why hasn't Google followed in the footsteps of OnePlus, Samsung, Huawei, LG, and other Android manufacturers and reduced the bezels? Well, the best guess at the moment is the Californian company will unveil a rival to the Face ID facial recognition system used on the latest iPhone models. The CAD models don't reveal a rear fingerprint sensor, so the Pixel 4 will either have to use an in-screen variant – like the OnePlus 7 Pro 5G – or use some sort of facial scanner.

The CAD models reveal two lenses on the forehead and two smaller, vertically-aligned sensors. The Pixel 3 and Pixel 3 XL introduced a dual-selfie system to take ultra-wide photographs – negating the need to pack a selfie stick when taking a group shot with a few friends. Whether the small new sensors will be used to authenticate purchases and unlock the phone with you likeness remains to be seen.

Secondly, whether Android smartphone owners are happy with the trade-off is also unclear. With the competition favouring in-display or rear-mounted fingerprint scanners in favour of huge screen-to-body ratios, it remains to be seen whether Pixel fans will be happy with the chunky bezels and new unlock method.

Another possibility for the sensors is that these will enable a new motion-sensing technology called Project Soli that uses radar to detect small movements in its view.

Google has been quietly working on this system for years. Project Soli is designed to allow you to control your smartphone by holding a finger or hand above the screen, so you don't need to mess around tapping buttons – helpful if you're cooking and have wet hands. It also means developers can use the screen real estate usually occupied with on-screen buttons to fill more content.