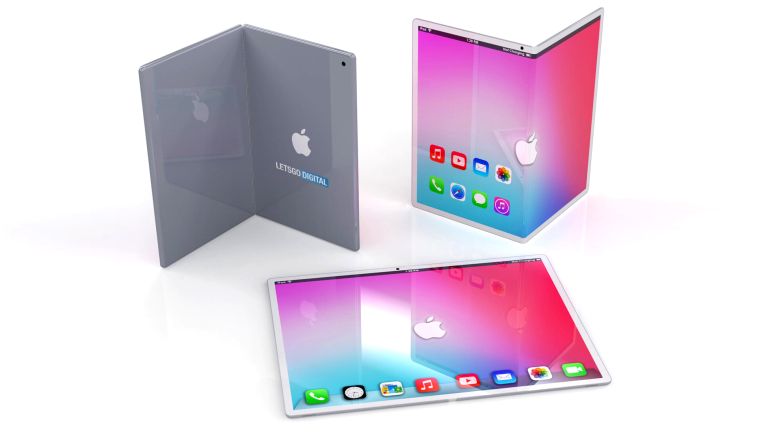 There's no shortage of buzz around foldable smartphones at the moment. Samsung unveiled the two-screened Galaxy Fold during its Galaxy Unpacked media event last month, Huawei took the wraps off its own pliable handset, Mate X, during the Mobile World Congress tradeshow last week, and Motorola has confirmed that it will launch a reimagined Razr with a folding phone in the coming months.

Google has confirmed plans to update its Android operating system to support this new breed to bendable blowers, suggesting that the Galaxy Fold, Mate X and Razr will not be the last of this new type of handset, which promises to offer more screen real estate to watch movies, play games and run multiple apps side-by-side.

However, there is one company that is keeping schtum about any plans to launch a new foldable flagship phone: Apple.

Apple holds a number of patents relating to folding smartphone displays, so it's clearly something that has crossed the mind of those toiling away in the R&D department in Cupertino, California.

That said, we'd be extremely surprised to see anything foldable bearing an Apple logo in the next 12 months. The technology company is known for its reluctance to be first out of the gate – instead watching its closest rivals compete for the gold medal and learning from their mistakes. Apple used the same strategy with the iPhone, iPod and iPad, which were far from the first in their respective categories.

However, that hasn't stopped excited designers mocking up what future foldables from Apple could look like. The team at technology blog LetsGoDigital have created three-dimensional models of a new iPad that folds like the Mate X, with the pliable display on the outside of the device.

Unlike devices with the fold on the inside, opening and closing like the pages of a paperback novel, this negates the need for a second touchscreen to ensure the device can still be used when the folding screen is stowed away. However, keeping the pliable screen on the outside does leave it open to scuffs and scratches.

The foldable iPad shown in the concept has a single rear-mounted camera as well as one front-facing selfie camera. Although the former can only be used when the screen has completely unfurled, the latter could serve as a rear-mounted shooter when the device is closed as the camera app could open on the touchscreen on the opposite side to the lens.

With the latest iteration of the iPad Pro, which ditched the physical Home Button in favour of an all-screen design, Face ID and the same swipe-based gesture controls seen on the iPhone X and later, Apple tweaked the screen sizes on offer.

The latest iPad Pro models are available with either 11-inch or 12.9-inch displays. It's unclear whether Apple would use flexible display technology to increase the size of the display to offer more screen real estate to draw with the Apple Pencil, run multiple apps side-by-side for enhanced productivity, enjoy movies and games on a bigger, more immersive panel – or would shrink the physical footprint of the tablet, so that it's easier to drop into a rucksack or handbag.

LetsGoDigital has also envisaged a folding iPhone, which includes the crease across the middle of the display – enabling it to fold in half like the flip phones of yore.

Apple is purportedly holding a media event later this month, although it's unlikely to feature this foldable tablet. Instead, the company is expected to unveil a second-generation pair of AirPods, as well as its new streaming video service to rival Netflix.