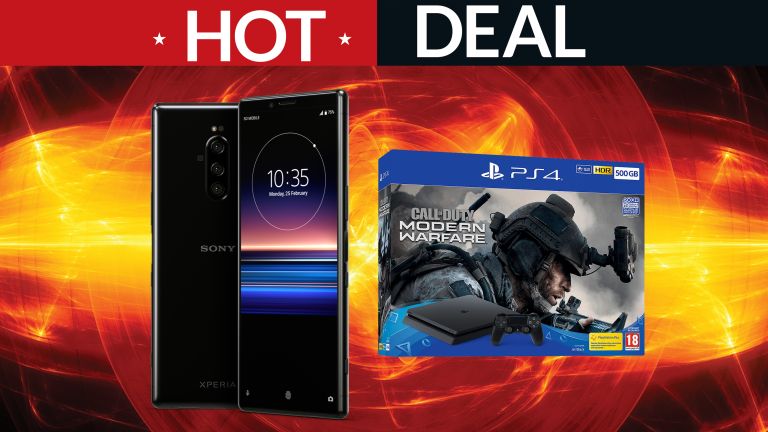 The Sony Xperia 1 is one of the unsung hero flagships of 2019, delivering a blisteringly fast, stunningly designed, gorgeous screen-packing phone that, in many aspects, out punches the best output of its competitors.

Which is why when we saw this deal from iD mobile that offers the Xperia 1 with a range of SIM plans and a totally free Sony PlayStation 4 games console along with the brand new mega hit, Call of Duty: Modern Warfare, for an attractive price point, we knew it was worth covering.

For anyone in the market for a quality Android phone upgrade, then this package seems very attractive to our eyes.

Buy Sony Xperia 1 with SIM plan | Get Sony PlayStation 4 with Call of Duty: Modern Warfare free | Up-front cost: £59.99 | Monthly cost: £39.99 | SIM plan length: 24 months | available at iD mobile
You get the Xperia 1 in your choice of colourway (black or purple) along with the SIM plan of your choice (plans start at £39.99 per month, but we would go for the £44.99 per month option for a good data allowance), a free 500GB Sony PlayStation 4 games console, and the very well received new first person shooter Call of Duty: Modern Warfare. Free delivery is included.View Deal

Had your eye more on a new Xbox games console? Well, then this very tidy Xbox One S All-Digital Edition deal is well worth a shuft. You get the console along with thre top games (Minecraft, Sea of Thieves, and Fortnite) for just £199.99. There's extra Fortnite freebies included, too, as well as one month of Xbox Live Gold and free delivery.

In our Sony Xperia 1 review, we noted how it was "the best phone in the world for watching movies" because its "4K, HDR, 21:9 aspect ratio OLED screen is a thing of true beauty". We also praised its "premium, mature design", "rapid Qualcomm Snapdragon 855 processor" and "immersive Dolby Atmos audio".

Meanwhile, Call of Duty: Modern Warfare just smashed directly into T3's best PS4 games to play guide, with our reviewer impressed with the "deep weapon customisation", "brand new engine" and the fact that "all post-launch content is free". Clearly, playing that game on a brand new, second generation PlayStation 4 Slim console is an experience any FPS fan is going to enjoy.

And, we think it fair to say that, after Call of Duty: Modern Warfare has, literally today, announced as being the best-selling game in October in the UK, many gamers have already voted with their wallets and are presently enjoying the brilliant single and multiplayer action the game delivers. It's literally one of the best games of the year, bundled in with one of the best phones of the year, playable on a completely free PS4 Slim.

Prefer to pick up a PlayStation 4 on its own, though? Well be sure to consult today's best prices below, with the original PS4, PS4 Slim and PS4 Pro covered. We've also got the very latest Sony Xperia 1 deals listed, too.