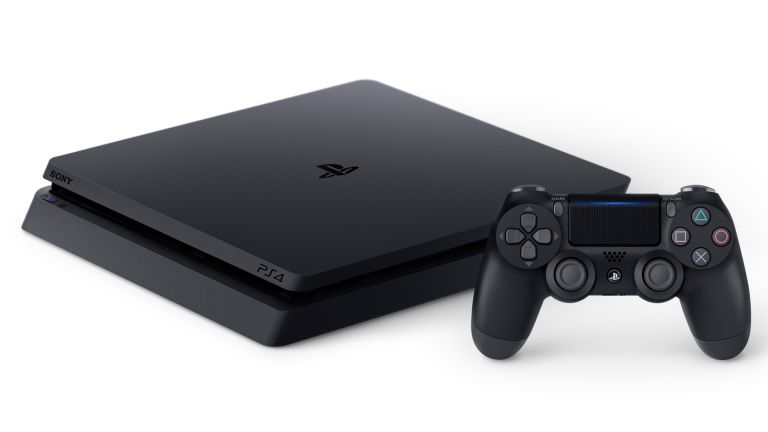 The PS4 Slim takes everything people loved about the original PlayStation 4 system and makes it better. Sony has played safe with the Slim, but that is no bad thing, as it was a top piece of hardware with an excellent games library to begin with. As such, if you're looking to game at 1080p and lean towards Sony's gaming ecosystem then it is an excellent choice.

Welcome to T3's official PS4 Slim review. Since its release the PS4 Slim has gone on to become the default PlayStation experience, with the original PS4 phased out and, for 4K TV users, the Ultra HD capable PS4 Pro released.

And, today, with Black Friday deals on the PS4 Slim delivering truly staggering discounts, this console is now more affordable than ever before.

And, with the slimmer PS4 capable of playing all of Sony's incredible library of awesome PS4 games, which includes epic titles such as Sekiro Shadows Die Twice, Devil May Cry 5, and Metro Exodus, it remains to this day one of the very best video game consoles to own.

Our in-depth PS4 Slim review breaks down everything you need to know about Sony's new default PS4 machine. We'll evaluate everything from the new slimline chassis all the way to the performance improvements under the hood. This is your one-stop shop for all things PS4 Slim!

If you currently know you want a PS4 Slim, but are looking for the best price on the console, then be sure to jump on over to T3's best PS4 deals guide, which has the freshest prices from online retailers. We've also rounded up the best prices on PS4 controllers over in our best DualShock 4 deals guide, too.

All that said, let's get stuck into this PS4 Slim review proper.

PS4 Slim review: so is it just a thinner model PS4?

To quote the Sir Humphrey Appleby, the answer is yes and no. The answer is yes in the sense that if you buy this new console you are getting the same basic gaming system as if you bought an original PS4. Power consumption is down 28 per cent compared to the original model, and the new system runs quieter and cooler too, however in terms of resolution and framerates, do not expect your games to look and play any different.

No, the new thinner PS4 is still a 1080p gaming machine, with games running at 1920x1080, and at 30 or 60 fps (frames per second) depending on graphical complexity. As such, if you are only interested in a games machine that can play titles at 4K resolution, then you can probably stop reading this review right now. If, however, you are in no rush to adopt 4K, or are quite happy for your 4K TV to do some upscaling itself, then read on.

On the other hand, the answer is no as this slimmer PS4 does in fact make a number of changes from the original model that, in general, are all for the better, making it a great all-round gaming machine.

First among these changes is the new, smaller design. The original PS4 measured in at 27.5 x 30 x 5.3 cm, which was in no way large. The new 2016 PS4 measures in at 26.5 x 26.5 x 3.8 cm, which is roughly a third smaller than that original system. The result is an incredibly thin gaming system that is actually comparable to a largish book rather a piece of gaming tech. The fact that is is noticeably lighter as well adds to this new look, as too the new all-matte black finish.

The overall shape remains similar, with those distinctive angles still present, however now rounded edges and a large recess around the midline grant the PS4 Slim a softer look. We're still not sure if we like this new look, however there is no denying that it is less intrusive and far more space-efficient that the earlier model.

In terms of ports and buttons, the system retains its front-facing disc slot and two USB ports on the front, however it now features physical power and eject buttons rather than touch-sensitive controls. Also, the top-mounted coloured light bar indicator that showed the status the system was currently in (such as sleep mode) has also been removed. Move round the back of the system and everything remains the same port-wise asides from the new absence of a digital optical out. As we are audiophiles here at T3 Towers, this element of the redesign was not welcome.

Lastly, the new PS4 Slim introduces a 5GHz IEEE 802.11 a/b/g/n/ac connection to the system. The original model could only connect wirelessly over 2.4GHz bands, so while we would still suggest plugging the system in via Ethernet cable to your router, if this is not an option you should now get a cleaner, more stable connection.

And, while we are talking about redesign, let's talk about the system's bundled controller, which is once again similar yet different to the original model. The new PS4 controller, at first glance, looks identical to the original. It feels the same too in the hand - which is great as the original controller was just lovely - and offers the same levels of grip and performance. On closer inspection, however, there are a couple of notable changes.

The first is very noticeable, with a new translucent lightbar stretching across the controller's touchpad. This has been included to allow players to see which colour they are set as without twisting the controller around in the hand. The second change is the new option of connecting the controller via USB connection for gameplay input. The original controller, in contrast, could only be charged via USB cable, relying purely on its Bluetooth connection for gameplay. This option to carry button and stick inputs over cable has been included to remove any chance of lag during pro gaming tournaments. This change also allows you to use the new DualShock 4 with PC without having to buy a Bluetooth dongle.

And the foremost thing that hasn't changed that we wished had is the 500GB hard drive. Sony has promised that a 1TB version of the new PS4 Slim is coming, however right now the only model you can buy comes with a 500GB hard drive. Now look, this is not a serious issue or anything, however after we'd got used to the 1.6 TB of space offered on the Xbox One S and the upgraded 1TB drive we have installed in T3 Tower's original PS4, to go back down to 500GB was a bit deflating.

Another thing that hasn't changed is the included Blu-ray disc player. No 4K Blu-ray player is included in either the PS4 Slim or PS4 Pro so, if you are looking for more of a media centre than a straight gaming console, then again this may be something to consider.

Look, only you can answer that question. This new thinner PS4 takes the world's best selling video game console, one that offers a gaming platform that is literally stuffed with amazing games, and makes it better. It is thinner, lighter, cooler and quieter. It also comes bundled with a slightly tweaked version of one of the best controllers ever made and costs a very affordable £249. In our book, that is a great product.

However, considering the wider context, you'll need to ask yourself a few question before pulling the trigger. First among these question should be whether or not you want 4K gaming now. If the answer is yes, then you need to wait for PS4 Pro or look into the Xbox One S. Secondly, you should also ask yourself what exactly you want this system to do for you? If the answer is to be a multimedia centre powerhouse for your living room, again you should probably look elsewhere.

Overall though, the PS4 Slim takes everything people loved about the original PlayStation 4 system and makes it better. Sony has played safe with the Slim, but that is no bad thing, as it was a top piece of hardware with an excellent games library to begin with. As such, if you're looking to game at 1080p and lean towards Sony's gaming ecosystem then it is an excellent choice.