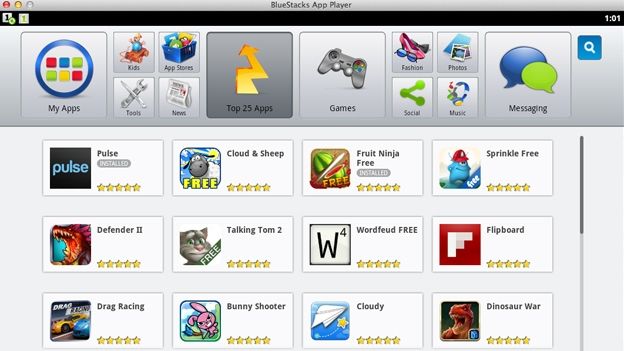 BlueStacks has followed up the launch of its Android App Player for Windows 8 by bringing 750,000 Android apps to Apple's Mac OS X computing platform

Apple Mac users can now access over 750,000 Android apps on their OS X machine thanks to a new software emulator.

The free BlueStacks App Player is now available to download in Beta from Bluestacks.com, bringing smartphone or tablet versions of popular apps like Flipboard, Instagram, Angry Birds Star Wars, Evernote and more to your MacBook or iMac.

After downloading the the BlueStacks App Player, users can search for their Android apps, which allows them to be downloaded from the Google Play Store or Amazon App Store. Apps are then opened within the Player.

From our brief tests, more often than not, the apps work, but others don't due to missing pieces of code, but it's sure to be somewhat hit and miss for the time being until it comes out of Beta.

The BlueStacks App Player was launched for Windows 8 earlier this year, bringing half a million Android apps into play for the fledgllng platform.