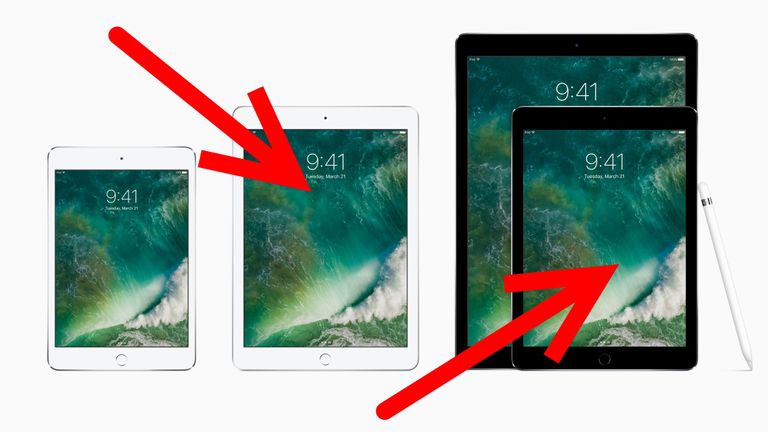 The rumour mill was right. Apple really was working on a another iPad, but it wasn't an upgraded iPad Pro, it was a

The iPad Pro 9.7 was launched this time last year, itself a smaller version of the iPad Pro that Apple launched in 2015. With a 9.7-inch display it matches the dimensions of the iPad Air 2 and today's new iPad

So how do Apple's latest two 9.7-inch iPads stack up? Here's the deal.

If you're in the market for a new Apple tablet then there's a lot to consider - you can now pick from four different iPad variants on the Apple website - and that's before you consider that each has a cellular version, in addition to the different storage sizes.

Apple made much of the 12.9-inch iPad Pro's display technology, and it continued the theme with the 9.7-inch model - in fact, it's one of the key features that differentiate the Pro iPads from the standard ones, with colour and brightness performance that Apple says is the best around (anti-reflective, fully laminated true-tone display with wide colour).

The newer, smaller iPad Pro did get a new feature over its bigger brother in the form of its True Tone display: Apple says this is designed to mimic the look of paper under natural light.It uses ambient light sensors to detect the level of light in the environment and adjust the screen accordingly.

The smaller iPad Pro is about 40 percent lighter to hold than its larger 12.9-inch sibling, with the same height and width but 1.4mm thicker.

The iPad Pro 9.7 has Apple's latest A9X processor, while the new iPad sticks to the standard A9, which we first saw in the iPhone 6S and then in the iPhone SE. There are 32GB and 128GB storage options, with both Wi-Fi and Wi-Fi and Cellular variants.

Both have the M9 co-processor.

The new iPad has stereo speakers but the Pro packs four speakers into its case, and those speakers use clever algorithms to detect how you're holding the iPad Pro, adjusting each speaker's volume accordingly.

Once again the specs are identical here: Wi-Fi (802.11a/b/g/n/ac) with MIMO, Bluetooth 4.2, GSM/EDGE/CDMA/UMTS/HSPA/4G LTE for the cellular model. The iPad Pro has one more connector, though: a Smart Connector for the Microsoft Surface-esque keyboard cover.

The iPad Pro also comes with an Embedded Apple SIM, while the standard iPad doesn't (cellular version only)

Another set of identical specs: Touch ID, a three-axis gyro sensor, an accelerometer, an ambient light sensor and a barometer.

The iPad Pro 9.7 camera is a big upgrade over the 12.9-inch iPad Pro, with the newer model sporting a 12-megapixel camera that's as good as the one inside the iPhone 6S and the iPhone 6S Plus.  It can also do live photos, has a true tone flash and supports wide-colour capture.

The new standard iPad sticks with the 8 megapixel and 1.2 megapixel cameras seen in the iPad Air 2. That means, while the iPad Pro 9.7 can record 4K video, the new iPad can't. It does have 720p slo-mo support (the iPad Pro can do 1080p).

As with all iPads, none have 3D Touch unlike the iPhone 6S and iPhone 7.

The iPad Pro has support for the Apple Pencil stylus, whereas the standard new iPad doesn't. The Pro also comes with support for the clip-on smart keyboards (and covers) that were ushered in with the first iPad Pro.

Polyurethane Smart Covers for the new iPad are available for £39 in charcoal grey, white, midnight blue, pink sand and (RED).

It's worth noting that the 32GB option for the Wi-Fi and cellular tablet isn't available with the 12.9-inch iPad Pro - maybe one more reason to get the smaller one.

iPad Pro vs iPad Air 2: which is best?

For a lot of buyers, the new iPad is going to be the most compelling, simply because they don't need a lot of the features of the equivalent-sized Pro.

It's easy to see why Apple launched the smaller version of the iPad Pro last year - the tablet is smaller, more portable and less expensive, while keeping (and in some cases improving) all of the best features. That's why it's still our favourite tablet. And, if Apple updates it this year, we can't see that changing - although we're very interested to see how the Samsung Galaxy Tab S3 does in its upcoming full review.

Now why not check out our guide to the best tablets?