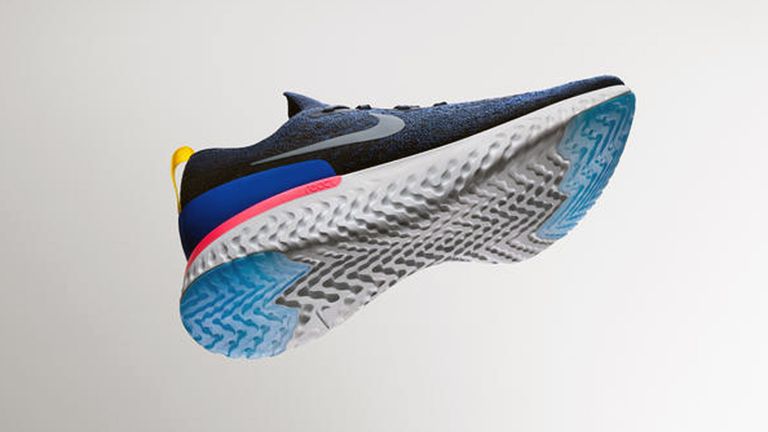 Nike’s put its art and sole into the Nike Epic React Flyknit and the result is the best everyday running shoe yet.

Running shoe makers don't exactly run scared of exaggerated claims but when a Nike designer tells the gathered world media at the London launch, that its latest shoes come with a new high-tech midsole with “the lightest, softest, smoothest and most responsive foam Nike has ever produced” it’s a big shout, even by their standards.

But that’s what Nike's Epic React Flyknit promised to deliver. Three years after Adidas launched its world-conquering Boost foam, Nike has hit back with its own proprietary sole technology – React foam – designed to bounce its shoes back into favour as the first choice footwear for everyday runs.

So how do they stack up against the best running shoes out there? One of T3’s resident marathon runners, Kieran Alger, clocked up the miles in the Nike Epic React Flyknit, to see if the first shoes to feature React foam live up to the launch hype.

Back in 2015 when Adidas launched Boost, a ground-breaking foam technology that offered improved response, durability and comfort, it changed the game. Despite Nike’s innovation in other areas, such as its Flyknit uppers and its laser-cut Lunarlon outsoles, Boost has presented a problem for the Oregon shoemakers ever since.

Not only has it been seen as the best option for a faster and better ride, its distinct style (not so much its 'polystyrene hi-fi packaging' texture as the overall silhouette it gives) has also helped Adidas cut into the fashion space. Now, though, Nike has finally responded with a new foam technology: React. It's clearly designed to create a sole to compete with Boost.

In creating React, Nike’s shoe designers set out with lofty ambitions, to take its Lunarlon foam and improve responsiveness, durability, weight and cushioning. Soft materials that might provide cushioning don’t tend to be good for energy return while compounds that are light also struggle with durability. React is lightweight, resilient, soft, durable, cushioned and responsive all at once.

According to Nike, thanks to some clever chemical engineering it’s managed to create a synthetic rubber compound – the primary ingredient in React foam – that’s overcome these problems. The result is a midsole foam which maximises energy return to give 13 per cent more responsiveness, increases durability so runners get 20 per cent more mileage out of a single pair of shoes while also being 30 per cent lighter than Boost foam. And you won’t be surprised to hear that because this technology has been developed by Nike (many foams are created by third parties and licensed to shoe brands), it won’t be appearing in any shoes that don’t have a Swoosh.

The foam compound was one aspect but Nike then used computational design, essentially allowing an algorithm to crunch thousands of running data points captured in its lab to reveal a design based on how people actually run, to create the one-piece midsole.

According to Nike this means a midsole that delivers cushioning and support in the specific spots needed during a run, while eliminating material wherever it’s not absolutely necessary in order to keep weight to a minimum. The visually complex pattern varies in depth, where deeper parts indicate areas of more cushioning and shallower portions produce more firmness.

While the React foam might be the headline grabber, that’s not all this shoe has going on. There’s the minimal, lightweight Flyknit sock-like upper we’ve come to love, fused with less glue to the React midsole that’s also a little taller and wider than you’ll find on most shoes, extending beyond the shoes upper, to offer a more supportive base. There’s also a heel clip to help moderate the response you get from the energised foam.

All of this and the Nike Epic React Flyknit still comes in at 239g, that’s 5 per cent lighter than its predecessor, the Lunar Epic 2.

Okay, enough about the technology, how does it feel on the run?

The first test of a running shoe is how it feels when you first put them on. If a shoe disappears on your feet, that’s always a good sign and the Epic React Flyknit pass this test easily. They feel light on the feet and the Flyknit uppers are snug, fitting close enough around the foot to feel secure but because of the Flyknit flexibility, still providing plenty of room for your toes to spread and move.

The next thing you notice is the springiness of the foam. We’ve tried the Nike Zoom Vaporfly Elite which were very expensively designed for elite athletes looking to conquer the two-hour mark in the men's marathon (the so-called Breaking2 project).

Well, the Epic React Flyknit offer a similar sensation for under £150. Even walking around you feel like the shoes are putting more spring in your step, but without it feeling unnatural.

If you’re used to a more minimal shoe, the sight of a sizeable wedge of foam can ring alarm bells as it often leaves you feeling like you’re not connected to the ground. But with the Epic React Flyknit this isn’t the case. Despite being soft, it doesn’t feel like you’re boinging around on bouncy castles, there’s still a good sensation of ground contact.

The Nike Epic Flyknit React are designed for those everyday runs from 5km up to a marathon. So you should be able to rely on these as your go-to in marathon training. We tested ours in exactly those conditions putting them through 5km, 10km, half and 20 mile runs on pavement, treadmill and some very like trails and stoney paths.

Overall, they performed well. There was a marked difference in the power behind our push off and the stability was good provided we stuck to roads and pavements.

On stepping onto a light park trail or a woodland path, where conditions underfoot got a bit more bumpy, the React foam soaked up the lumps but there was definitely a question mark over the stability. To be fair to Nike that’s not where they’d like you to be using these shoes but if you like to run the light off-road, you are probably better off with one of our best trail-running shoes instead.

Nike has produced a winning shoe here. You can produce fancy foams and add technical gimmicks to shoes all you like but, first and foremost, a running shoe has to be comfortable to run in.

That sounds obvious, I know, but plenty of shoes look good on paper but fail that simple comfort test. Fortunately the Nike Epic React Flyknit performs on the roads, not just on the designers CAD desk.

The Flyknit uppers are as excellent as ever, and the React foam puts just enough in your step that you feel powered but not unstable. As good over a steady 5km as they are on the longer marathon training runs, these are a great choice for a pair of go-to everyday running shoes. In some of the colour options, they also go perfectly alright with jeans, too.