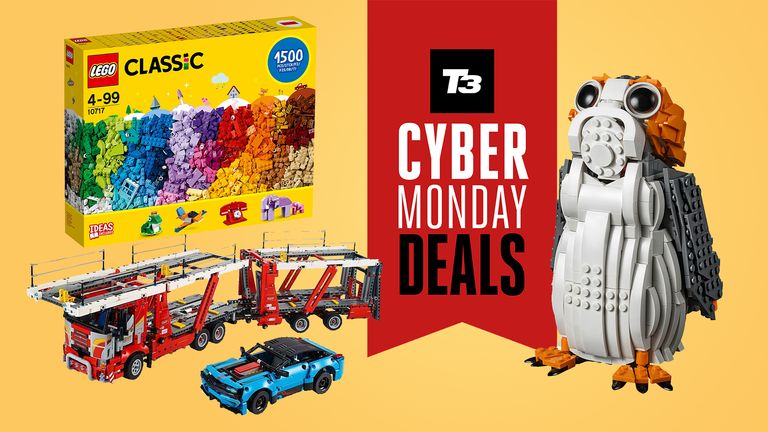 There are great Cyber Monday Lego deals to explore today from the Lego Store (which run out today!), as well as in Argos' Cyber Monday sale, and eBay's Cyber Monday bargains.

These include sets from loads of popular ranges: Lego Technic, Lego Star Wars, Lego Marvel, Lego City, Lego Overwatch, and even just big boxes of Lego of assorted bricks, if you like to go old-school.

There are sets that are perfect for kids to play with, and some that will find more favour with adults who fancy a project or something to show off.

We've picked out some sets that we think are especially worth looking at below, but be sure to take a full look at Lego's Cyber Monday sale in particular, because there are loads of sets that are 'Retiring soon', which means Lego won't make them any more. If they sell out in this sale, that's it, then!

Lego Technic Porsche 911 RSR | Save £42 | Now £97.99 at the Lego Store
Being a Technic model, this is just crammed with detail, from the realistic six-cylinder Boxer engine with moving pistons to the working steering, to the little details in the cockpit (including map of Laguna Seca), to the overall look at lighting design. At 1,580 pieces, it's great for car-loving kids to dive into, or Porsche-loving adults. This deal ends at 11.59pm on December 2nd.View Deal

Lego Star Wars Porg | Was £59.99 | Now £47.99 at the Lego Store
This adorable life-size Porg set has flapping wings and an opening mouth, both controlled by levels on its back. The Last Jedi's cutest cast member even comes with a little display with facts about it. This is one of the sets that are being retired soon, so if you love Porgs, you'll need to adopt now! This deal ends at 11.59pm on December 2nd.
View Deal

Lego City Passenger RC Train | Was £120 | Now £65 at Argos
Mixing the joy of model trains with the joy of Lego, this is joy squared. The train has an interior for play, a platform to pick up passengers, and a 10-speed wireless remote control for driving it around. Of course, you can buy more track to expand the set in the future, and drive it through your Lego town.View Deal

Lego City Space Rocket and Launch Control Playset | Was £90 | Now £54 at Argos
Lego worked with NASA on Mars colony sets for 2019, and this is the biggest and best of them. It's got a space centre, it's got a big rocket, it's got a cool transportation track and robotic arms – the perfect gift for kids who dream of other planets.View Deal

Lego Technic Car Transporter | Was £139.99 | Now £94.99 from eBay
This hefty articulated car transporter comes with a car that fits on it, and is the right scale to carry the Lego Technic Corvette (which is also on-sale at £30) to give it even more to do. At nearly 2,500 pieces, and 33-inches long when finishes, it's an impressive beast – and it's a 2-in-1 model, so you can rebuild it as an entirely different set instead. This deal ends at 8pm on December 2nd.View Deal

Lego Marvel Avengers Iron Man Hall of Armor Lab | Was £55 | Now £36 at Argos
Get inside Tony Stark's garage with this set, which includes various armour types of different sizes, plus a rotating podium with multiple configurations, as well as computer console and friendly robotic arm with fire extinguisher.View Deal

Lego Classic Medium Creative Brick Box | Was £25 | Now £14 at Argos
It's 484 pieces of Lego, including windows, eyes, 18 tires and wheel rims, green baseplate and more, with bricks that come in 35 different colours. It's just a lovely box of stuff to play with. But if you want more bricks, scroll down just a little…View Deal

Lego Classic Bricks Bricks Bricks (1,500 pieces) | Was £49.99 | Now £39.99 at the Lego Store
The name of this big box of bricks says it all – you get 1,500 pieces in vibrant colours, including building bricks, shapes, wheels, windows, doors and eyes. It comes with some ideas for what you can make, but it's main here to fuel imagination. This deal ends at 8pm on December 2nd.View Deal

Lego Overwatch D.Va and Reinhardt | Was £34.99 | Now £27.99 at the Lego Store
Our favourite of the Lego Overwatch sets (but mostly because we're big fans of these two characters), this set gives you two of Overwatch's tanks to build, as well as minifigures of the people inside. They're poseable, and a lot of fun to put together. This deal ends at 8pm on December 2nd.View Deal