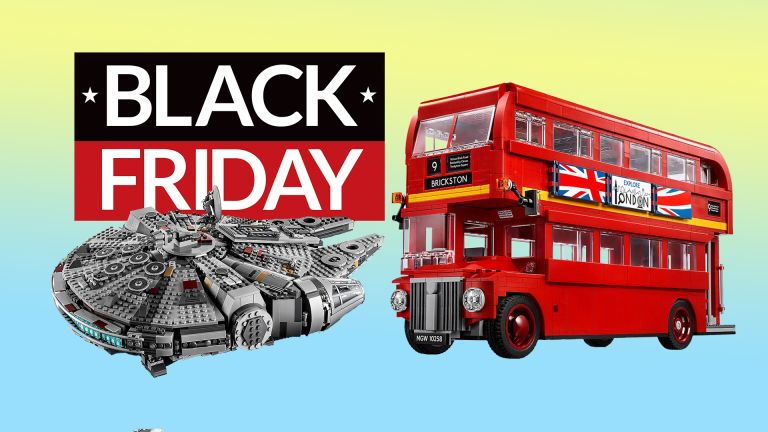 The Lego Black Friday deals are building and building, appropriately enough – we've got great new sets from the Lego Star Wars range, and a major bargain on Lego Technic, along with a few other tempters.

There's an all-new Millennium Falcon set from The Rise of Skywalker, which includes the return of Lando Calrissian, plus some new characters, and good ol' R2-D2 and C-3PO. This one is perfect for kids, because it folds open to reveal the full interior, turning it into a playset at a moment's notice.

Speaking of space, the Lego Rocket Assembly is a pretty great set as well, since it gives kids a whole narrative to play – from building the rocket, to launching it, to landing and exploring with a rover lab.

The Lego Technic Corvette has the biggest discount here, and is hard to pass up at just £24 – for car fans, or Lego Technic fans – it's a bargain of a little gift.

But maybe our favourite of them all is the Lego London Bus, bringing the classic Routemaster to life in a lovingly detailed brick form.

Lego Star Wars Millennium Falcon | Was £146 | Now £118 at Argos
From the new film, The Rise of Skywalker, this Falcon set comes with seven minifigures (if you count the droids), and the cleverly design top folds out in four quadrants to reveal a full play area inside – it looks great as a ship or as a playset.View Deal

Lego Creator London Bus | Save 20% | Now £87.99 at Argos
Blimey guv'nor, 'ave a gander at this beauty and no mistake. Or something. This 1,686-piece London bus has a lovely amount of detail, and brings a touch of vintage class to your Lego shelf.View Deal

Lego Rocket Assembly & Transport Space Port | Save 25% | Now £89.99 at John Lewis
This is an excellent multi-part playset – you get multiple buildings for rocket constructions (including an assembly crane), a multi-stage rocket with transporter, and a rover (plus little excavation area for it to explore). It's a whole space journey in a box, built from a satisfying 1,055 pieces.View Deal

Lego Star Wars BOOST Droid Commander | Save 20% | Now £134.99
This set of three adorable droids (R2-D2, the Imperial Mouse droid, plus everyone favourite: Gonk) can be controlled from a wireless motor unit that fits inside them – it talk to the accompanying app on phone or tablet, where kids can learn programming by taking the droids through various missions, physically moving them around. Appropriately enough for Lego, you program by building 'blocks' together that control things like movement, or other accessories you'll build onto each one (such as R2's computer interface arm).View Deal

Lego Technic Chevrolet Corvette ZR1 | Save 40% | Now £24 at Debenhams
This is a great little Technic set – though at 579 pieces, it's not even that little, though is still aimed at ages 9+. Like all Technic cars, it has working steering, and even a moving engine: you'll see the V8 pistons firing as you move the car. It's full of authentic details true to the real car, too.View Deal