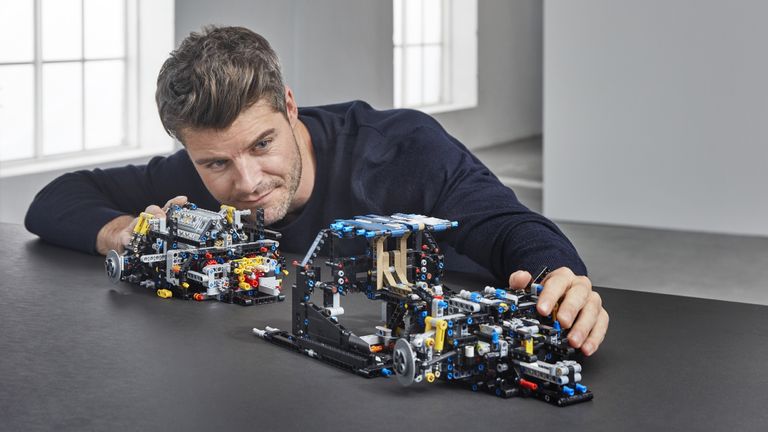 Some say that Technic is Lego for grown-ups. While we say adults should feel free to get any Lego they want, there’s no denying Lego Technic’s selection of ridiculous cars, construction vehicles and ocean science vessels are more on the ‘mature’ side.

Technic models are among the best Lego sets you can buy (there are regularly great Lego deals to be found on them too). The key thing about Technic that separates it from other cool lego sets is that is uses different types of pieces, to create especially intricate machinery and mechanisms as part of the recreations.

This makes them much more elaborate and in-depth to build, but really rewarding at the end of it, when all the gears and levers work together in harmony.

If turning a pile of plastic into a mechanical marvel sounds like your sort of thing (or the ideal sort of gift for the Lego lover in your life), we’ve chosen our favourite Lego Technic model, from the mind-blowing and super-expensive down to great little cheap gifts (for others or yourself).

This supercar makes for a super set

It’s a big project to take on, but for car fans (or Lego Technic fans), this is just about an unbeatable set. The 1:8 scale model (22 inches long when finished) has a specially redesigned eight-speed gearbox (with paddle gearshift) connected to a 16v engine model with moving pistons (which move at different speeds at different gears, naturally). As you build up the model around this functional core, the super-deluxe instruction books explain how the model was design with Bugatti’s input, and the way you connect the different parts of the Lego structure mimic how the actual car is built. Overkill? Comically so. Amazing? Oh yes.

A jaw-dropping beast, and the ultimate Lego Technic set if you want want is motors and moving parts. At 28 inches long when finished (and the biggest Lego Technic set ever at over 3,900 pieces), it’s unsurprisingly packed with mechanical detail, and is powered by the built-in motor and battery. The bucket wheel turns as the long conveyer belt pushes the tiny Lego rocks towards the waiting mine truck. You can use a joystick to rotate the whole structure, and it drives around on its huge tracks, too (if you have the space for it to go anywhere…). And that’s not all! You can build the damn thing into an entirely different model if you want: a mobile processing plant for the Lego ore, which can measure up 34 inches long! So get two then: one for the extraction, one for the processing. Simple.

Two wheels good (to build over a weekend)

The only Lego Technic bike in this list is nowhere near the complexity of the big cars or earth-movers, but it hits all the right notes for a smaller cheaper piece (or just for motorbike nuts). It includes functional suspension and steering, and a two-cylinder engine with moving pistons as you roll it around. Plus a kickstand! Even better, you can actually then take it apart and build with a second set of instructions for a hoverbike concept vehicle, developed by Lego and BMW.

A self-driving, but not self-building, concept

This vehicle is a concept for a self-driving wheel-loader, developed by Volvo and Lego, that could be the construction vehicle of the future. To that end, it comes with an adorable little Lego drone that would act as the mapping eyes for big loader. And it has a secondary design you can build, which is another concept along similar lines: a self-driving dump truck that’s once again led by the drone. They both look great, and have some nice articulations – the rear of the Loader model extends out as a counterweight, while the dump truck… dumps, predictably..

An iconic car gets the fantastic plastic treatment

Like the Lego Bugatti Chiron, this is a lovingly produced, 1:8-scale ode to a truly great car. You’ll build the suspension, gearbox (with paddles for shifting) and flat six engine and the connecting mechanicals, then add a detailed interior complete with racing-ready setup and working glovebox that includes a unique serial number, and finally that body work. Pop open the rear to see the engine pistons moving as you roll it. Like the Bugatti, it’s 22 inches long when fully built – a real showpiece.

The only self-built plane that’s ever excited us

This ‘racing jet’ is one of the few models here that has a Technic battery and motors powering its functions, and it makes for some really slick results. The motorised features include a jet nozzle that can switch between a VTOL downward angle and backwards for regular flight, moving flaps, and moving the undercarriage. It’s pretty big at 22 inches when complete, considering it has a lot fewer pieces than the likes of the Porsche above, but it makes all of those moving parts look even more impressive. There is a second suggested model you can build (a private jet), but it’s nowhere near as cool as the basic one.

One of the most impressive Lego Technic models for resemblance to the original, the Mack articulated lorry is hella articulated, including front-wheel steering, rear wheels connected to the six-cylinder engine with moving pistons, moving joint for the trailer, and an elaborate landing legs and crane system for loading the container (which has opening doors) onto the rear. There’s even a little bunk bed in the cab for tiny Technic drivers. It has a second optional official build, which is as a Mack garbage truck. It’s quite an interesting model, including lifting forks and a mechanism for pushing rubbish out for landfill… but it’s still a garbage truck.

We’ve done air and land, so it’s only right that we fit in a sea-going Technic set here. The Ocean Explorer is three vehicles in one: a ship complete with moving crane; a deep-sea submersible that can be hoisted by the crane; and a helicopter to sit on the provided helipad. It’s full of cool little details and, like many of the sets here, comes with a second configuration you can build it in, as a push boat and barge.

You’ll be happy to see them, for once

A perfect gift for the Lego Technic fan in your life, the Roadwork Crew set builds a small tipping truck and digger, with various rotating and moving parts. The truck has a little trailer you can load the digger onto, for transporting (er, around your shelves). It’s another 2-in-1 model, though, so there are alternative instructions for a gritter/plow that’s a little bigger. It looks great either way.