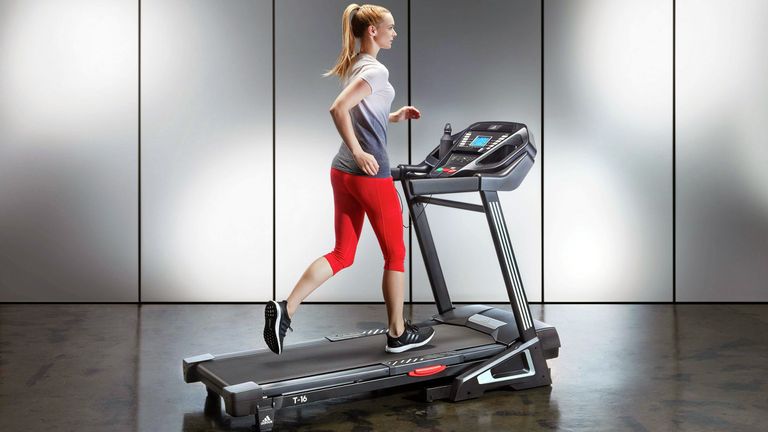 The weather is cold and dark, the belly fat is mounting and the thought of heading outside for a run in the drizzle is about as appealing as being tattooed on the eyeball. Want to get fit but don't want to get soaked in the rain? Buying a treadmill can be the answer.

Every burgeoning home gym should start with the best treadmill that you can afford. It's a perfect way to offset a sedentary lifestyle – getting your 10,000 steps per day, but at speed. Many home treadmills in the past were pretty poor. Nowadays, though, you can get something very like the kind of machines you'll find in a gym. And by that I mean really swanky gyms, not the ones you get in Portuguese hotels.

You will have to pay for the privilege, alas. At least £500 for something solid and into the low thousands for the really Virgin Active-style treadmills. However, this kind of thing can typically be found with a reduced price tag if you hunt for it and even the more basic systems are a good way to get the body moving... without leaving your front door.

How to buy the best treadmill

Of course, the TechnoGym MyRun sits at the top end of the budgetary scale – all the best stuff does, doesn't it? – but that's not to say there aren't great choices to suit less extravagant tastes.

Prices range from around £160 for the really basic, self-propelled models, but these tend to offer a very unrealistic running experience, so really the sweet spot between performance and price starts at around £600.

A good, mains-powered treadmill is judged on its running deck, which has to absorb the impact of a run while simultaneously representing an outdoor surface, as well as keeping the amount of noise it produces to a minimum.

The cheaper the unit, the more likely you're going to hear the irritating whine of electric motors emanating from a distant room while trying to catch up with EastEnders.

Naturally, the more money you spend on a treadmill, the more technology is thrown at it. So if you like tracking stats, running along with a virtual partner or ingesting some multimedia, then its worth opting for the machines with built-in screens or reliable smartphone connectivity.

RRPs can be punitive but you'll found the usual online-shopping suspects tend to offer enormous discounts off sports equipment of this nature.

Our price widgets will always pull in the lowest price offered by our retail chums.

One final tip: sports scientists have found that runners tend to exert less energy when pounding the miles on a treadmill, presumably due to the springy running board offering an extra boost.

So, if you want to keep fit indoors, much sure you place the speed on a faster setting than you think you need.

The best treadmills available to buy today, in order

The forerunner to this machine made up for its lack of speed with some amazing incline ability, but things have changed slightly in this update. Users can now crank up to a 12 per cent climb, as opposed to the previous gen's madcap 40 per cent, but the top speed has been increased to 18kph, allowing for much better interval training workouts.

The relatively small running deck might feel a little weedy compared to the mammoth machines found in your local gym, but the compact dimensions also make it a great option for those short on space. The vertical grab handles are a nice touch, as they allow for steep incline power walking with the added bonus of heart rate monitoring. The built-in speakers and numerous HIIT workout plans are also nice touches.

For under a grand, you are not going to get anything better than this. Realistically, you should spend more to get a more gym-like experience but this will serve most people's needs very nicely indeed, thank you.

More than just a running machine

+A beast of a workout+Burns more calories

-Not a traditional running machine

The Assault airRunner does so much more than a standard treadmill. It doesn't sport the typical motor-powered belt like others, but instead feeds off user input to crank up resistance and adapt with effort.

It also feels like running on air, while the slightly kicked-up design means there really is no limit to how hard you can push yourself on it. Designed with HIIT in mind, it is great for cranking up the pace in a split second, without the awkward wait for a belt to catch up.

Worried about parting with the dosh? Its steel frame and handrails, corrosion resistant hardware and a slat belt running surface are built to last up to 150,000 miles of use.

View at Abt Electronics

A name that will be familiar to anyone who frequents the gym, Life Fitness produces top quality equipment that can also be introduced to the home with minimum fuss. The standout feature on this model is the Track console, which easily connects to smartphones and tablets in order to harness the power of the excellent Life Fitness app. A powerful FlexDeck shock absorption system is said to reduce impact on joints by 30 per cent. It's fairly expensive but you get what you pay for.

+Folds up to save space+Built-in pulse monitor

This is a great entry-level treadmill that'll suit many casual/skint runners just fine. Space will likely be one of the major factors in the decision for or against a treadmill at home, which is why many are designed to neatly fold flat so they can be stowed against a wall.

The mains-powered Active 120 from York Fitness features an easy belt folding mechanism and wheels, so the unit can be moved around the room with minimal effort. A 1.25 horsepower motor delivers speeds of up to 16kph (just under 10mph). That's a low slower than a gym machine but a perfectly adequate pace for occasional joggers.

Tech on board includes hand sensors for an acceptably accurate heart rate read out, full LCD display and 13 preset programmes aimed at a number of fitness goals. A slim line belt could prove a problem for more portly users, however.

The best gym-level treadmill for home use

This compact running machine won prestigious Red Dot and iF design awards for its small but beautifully formed exterior. An impressive quantity of features is crammed into the MyRun's svelte frame.

Perhaps the killer feature is a punishing maximum incline of 12 per cent. That's great for training for fell runs and general cardio conditioning.

The built-in screen gives basic run information but things gets really smart when synced up to a tablet via a built-in Bluetooth connection.

From here, it's possible to relive outdoor runs via data captured from the TechnoGym App, experience a workout session that adapts to music in your library and receive detailed analysis of running style and ways to improve.

The MyRun machine is also the first to feature a surface that adapts to the way you run and absorbs impact to reduce the risk of injuries without sapping power.

Despite all that power, it's designed to be set up in a matter of minutes. Just follow an incredibly speedy DIY assembly process, plug it into the wall and get running.

Admittedly, the price tag will be at the very top of most treadmill budgets but TechnoGym supplies its products to some of the UK's best gyms, and it knows a thing or two about how to create a realistic running experience that reduces the chance of injury and will go the distance. This machine is also Zwift compatible, which is a major plus.

Holy sweet mother of pearl, this is one eye-wateringly expensive machine, but then if you really must have gym-quality kit in your abode,  there really is only one brand to consider. It's an absolute unit and weighing a massive 206kg, you are going to want to have it professionally installed and then leave it in that place forever. But its 16-inch touchscreen tablet and Lifescape, Zwift Run and RunSocial connectivity means that you won't really want to move it.

Plus, it works with Netflix, online radio and much more, so even if you give up running, you can always use it as a bizarre, lounge-based entertainment console.

The T-16, from popular German sportwear brand Adidas looks a bit spindly at a glance, but it actually possesses a very generous 51cm wide running deck. That's excellent considering the unit itself measures no more than 84cm in width, and means you get more space for elaborate interval training, sprints and other such cardio-based folly, without eating into precious floor area at home.

The 2.75hp engine allows running speeds of up to 18km/h (11mph), which is a fairly challenging pace for most mere mortals, as well 15 levels of incline that are easily adjusted from 0 per cent to 15 per cent thanks to the multitude of buttons on the centre console.

Other areas of the treadmill are a little basic, with a rather old-school digital readout, and built-in speakers that wouldn't be a substitute for your headphones even if you use the ones that came free with your mobile.

Even if it's not quite as robust or clever as rivals on this list, the T-16 is still a solid, pacey offering for those looking to train hard at home.

Pro-spec without the pro price tag

Coming in at just under £1k, this isn't the cheapest machine on the list but it is also no way near the most expensive, yet it offers some extremely competitive features.

These include a generous 12 per cent incline gradient, built-in workout fan, 32 pre-set workout programmes and an LED display that offers all sorts of fitness metrics to suit various training regimes.

Great for heavy use, the treadmill features a professional grade motor that is built with high-grade components and features a dynamically spin-balanced assembly (whatever that means) to power the treadmill up to a top speed of 22kph/13.6mph.

That might not be full commercial gym sprint pace, but it's more than enough for a domestic jog.

Sitting comfortably at the 'affordable' end of the spectrum, this offering from Reebok packs some pro-spec features that feel rather generous for the money. A clever 'ZigTech' cushioning system on the deck disperses the impact energy across the length of the running deck, helping to protect your joints, while the safety cut off clip is something that is typically seen on more expensive models.

Although easily folded and stashed away, the running deck has been designed with long-legged joggers in mind and the unit has been rigorously tested to withstand users that weigh up to 17 stone. Alas, the digital display feels a bit cheap on this model and the myriad buttons aren't quite as neat nor easy to get on with as others on this list but then what do you expect of the world's 9th best treadmill?