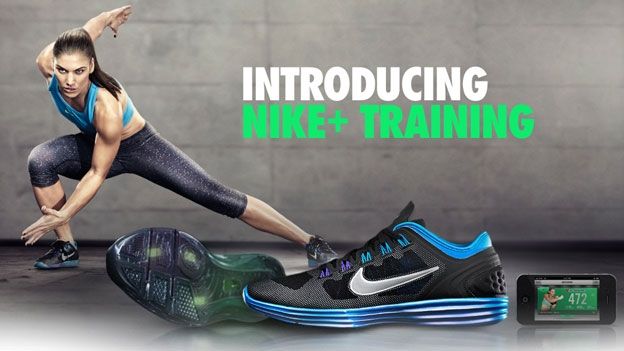 Tracking tech is the new big thing and Nike+ is about to get smarter, introducing in-shoe sensors that put new performance stats at your fingertips

Nike+ has been with us for almost 10 years and recently launched the Nike Fuelband, but until now the tools on offer to track our fitness activity have been based on a fairly limited range of stats generated by GPS and stride-sensing chips in your shoe.

Throw in some vital stats like your height, weight, age and gender and the Nike+ tools of the past have also been able to give you extra data like calorie burn. Yet while GPS tracking and stride sensors are great for keeping tabs on how far you've run, we've never been able to monitor performance stats on all those other activities we do in the gym. Until now.

With the introduction of the new Nike+ Training system, the sports giants are giving you the power to track a whole lot more, putting what Nike describe as professional athlete lab-style insights, into the hands of us mere mortals.

Nike+ Training System: How it works

These work alongside an internal three-axis accelerometer and Bluetooth sensor that accurately gather information about your movement and wirelessly transmit that data to your smartphone. Sadly, only iPhone at this moment in time but we're told Android support will follow.

The three-axis accelerometer and Bluetooth sensor are contained in a removable disc that lasts for about 40 hours between charges. Once you're out of juice, the sensors are charged via the included USB adapter.

The Nike+ Training app displays this data as a number of different metrics, giving you easy access to previously unknown information about your workout, including, how fast you move your feet, how high you jump, how long you stay in the air and your speed across the ground including lateral movement.

This new technology means you can now quantify a wider range of exercise activities like skipping rope, lunges and rapid fires.
Workout statistics can then be shared and compared with friends via Nikeplus.com and social networks, allowing you to challenge people and add a competitive edge to your fitness regime.

The first Nike+ Training shoes to hit the UK will be the Lunar Hyperworkout+ for Women and the Lunar TR 1+ for men. Plus, the Nike Hyperdunk+ will also be available for basketball fans.

We put two of the new drills to the test - jump height and rapid fires.

The live data was displayed on a big screen in front us rather than syncing to an iPhone but the principles remain the same and you could easily see how a similar big screen set up could be used in gyms.

Before starting you need to sync the shoe sensors with the app. This was straight forward and took no time and will only be necessary once before each workout.

As part of the set-up, you're shown a heat-map style image of your feet on the screen that lets you ensure the sensors are tracking. All movements detected are shown with red areas and the sensitivity was impressive, even pushing your toes downwards into the sole of the shoe was picked up.

The Rapid Fires Drill tests how long it takes to do a set number of rapid fires, essentially sprinting on the spot and tracking your foot strikes. The accuracy of number of steps counted was really impressive. There was no delay at all in on-screen totals being updated.

The Jump Test which measures how high you can jump from a standing start is mainly aimed at basketball players but was also extremely responsive with a matter of seconds between the jump and the final result showing up on screen.

There was also the Skipping Rope test – boxer style rope jumping that measures your overall height skipped in a set time.

The whole system had the feel of Wii Fit but brought into the real world, for people who want to do proper training.

From just a short play it's easy to see how it can bring a competitive edge to your training that'll have you trying to beat your own personal bests.

Simplicity is key with any app but this is vital with fitness apps. Anything that feels like it's interrupting your workout or making it over complicated is a bad thing.

The usability of the Nike+ Training app was excellent. Much like the Nike+ Sportswatch and the Fuelband Nike has focused strongly on making this out-of-the-box, instant-on tech that anyone can use within minutes.

We didn't personally get to test the shoe sync with the app so we can't comment on how robust that is but from the demo it appears that the steps you need to go through to get started appear very straightforward.

Once your shoes are paired with the app there are a number of different options.

Live mode gives you the option to track more freeform activity, capturing data on things like steps, jumps and foot speed. The aim here is to beat your own personal bests and set your own drills.

Choosing between Beginner, Intermediate and Advance gives you a range of weekly workouts and for each workout there are different types of Drill Packs. Within each of those packs you're given drills to complete.

For each drill there's a very handy video to help you nail your technique before you start. This makes getting into new workout much easier, no matter your level of fitness or knowledge.

There are ten sport star inspired pre-set Drill Packs that let you access training regimes that the likes of Rafael Nadal, Jabvier Hernandez and Manny Pacquiao might use to get them into shape for their sport.

The programs consist of a series of short, sharp workouts, designed to help you get fitter, faster and stronger. Daily programs can also be created based on how hard you want to train.

The profile screen gives displays all of your key stats including Total Workouts, Fuel per workout and Calories.

Nike+ Training is a great piece of innovation that demonstrates just how much technology will change the way we keep fit and stay motivated.

The stats obsessed will love the level of detail you get both on the iPhone app and via the web tools while the social competition element really does offer you the chance to take on the world. Provided they all buy into it as well.

It's easy to set up, extremely intuitive to use and provides a level of detail that we've never had before. The sports star drill packs are brilliantly executed and the potential to train in a similar way to the stars at the top of your chosen sport is inspiring.

The negatives? Being locked into buying Nike trainers - and only one variety at that - won't please everyone.

The lack of Android app is also irritating but it's unlikely to be long before we see it migrate.

Overall first impressions are that this offers a great new fitness tool and points towards a future where our every Zumba step or body combat high kick can be tracked, shared and improved.

Don't forget to check back in a couple of months for our full review and the final verdict on the Nike+ Training system.