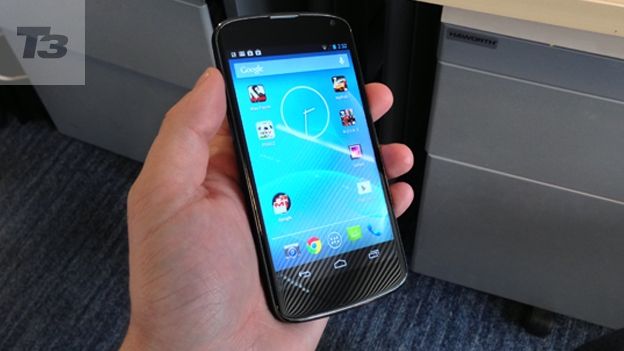 The Google Nexus 4 by LG is the brand's new flagship smartphone but can it take on the iPhone 5 and the Samsung Galaxy S3?

Update: The new Google Nexus 5 is now on sale, sporting Android KitKat, a 5-inch screen, a new slimline chassis and a Qualcomm Snapdragon 800 processor. The Nexus 5 UK price is £299 for the 16GB model and £339 for the 32GB version.

Why now? With Apple having just released its Nexus 7 competitor, the iPad Mini, it seems as though Google is looking to take on the entire Apple ecosystem with a full range of products.

With Android Jelly Bean 4.2 on board in its purest form, the Nexus 4 is the flagship for Google's latest OS. However with an unassuming design and sub-£300 price tag you may be wondering then how Google is going to accomplish this, well read on and you'll soon realise that it's what's underneath that counts just as much as what can be found subtly lurking on the surface.

First thing we noticed was just how un-noticeable the Nexus 4 actually is, in fact if you just glanced with the screen turned off it could stand in as any number of nameless Android smartphones.

Taker a closer inspection however and you begin to notice the more premium details which set this apart from the competition. The Corning Gorilla Glass 2 display is slightly curved at the edges letting the finger slide of the screen.

On the back you'll find a glass panel protecting a dark shimmering dot matrix pattern not unlike the wallpaper found on the first Nexus with a metallic band running around the phone. While the glass on the back is supposed to be scratch resistant we soon found that it was not invulnerable to the odd car key.

Weighing in at 139g this isn't a light smartphone however the Nexus 4 manages to distribute the weight in such a way that it adds to the sense that this is a smartphone that could survive day to day without instantly needing to buy a case (iPhone 5 we're looking at you).

The Nexus 4 sports a 4.7-inch 1280x768 display which we can confirm right now is brilliant. With 320 pixels per inch (the iPhone 5 is 326ppi) text is razor sharp while images are bright and vivid, even bright sunlight.

LG has followed the display philosophy that by going wider you prevent the issue of not being able to reach the top of the screen with your thumb. At first this stubby display felt odd to use but after a while we have to agree, our thumbs aren't growing any time soon so it makes sense.

Video looks sharp and smooth with Play Movies offering up a huge selection of new releases and classics to rent.

LG has included a much needed 8MP camera on the back of the Nexus 4, a sensor upgrade that was badly needed after the OK camera on the Samsung Galaxy Nexus.

What you get in return is a superb camera that copes with outdoor light extremely well however on the low light images we did find that grainy haze begin to appear quite quickly. With a strong flash this is easily compensated for however it does mean it's by no means up to the standard we've seen on the iPhone 5 or the Nokia Lumia 920.

Features are basic but brilliantly accessible thanks to Android Jelly Bean; simply hold your finger anywhere on the screen while the camera is open and you're presented with a simple easy-access menu of scenes and modes. Most notable of these is PhotoSphere the new 360-degree camera mode found on the Jelly Bean 4.2 update.

Taking panorama one step further PhotoSphere lets you take a single image and then, following the instructions, build up a 360-degree tile of images which the smartphone then stitches together. It works beautifully and while it requires some patience it's a welcome addition to Android.

By now you're probably beginning to wonder where the catch is, and to be honest it isn't found here. Under the hood there's a blisteringly quick Quad-core Snapdragon S4 Pro processor along with 2GB of RAM to help back up Google's claim that this is the fastest Android smartphone available.

Well Google and LG can hold their heads high as it is an impressively quick phone. Menu navigation along with processor intensive tasks never feel like a struggle with games making full use of the power and the display.

Elsewhere in the internals you'll find the standard fare of Bluetooth, WiFi and also NFC making sure that this is a smartphone that does not need wires.

With the same size battery found in the Samsung Galaxy S3, the Nexus 4 should be able to manage a days usage without too much hassle.

Unfortunately this was not the case. While with standard usage (texts, browsing and the odd call) we were able to get through until mid-evening, intensive usage quickly downed much of the juice.

It's not an uncommon problem with modern smartphones however it was alarming to note how quickly it dropped after just a few hours heavy usage.

As we mentioned in our initial hands-on review the Nexus 4 is a new type of smartphone which takes the physical device and treats it as a portal to the feature presentation; Android.

While the design is unassuming, turn the screen on and you're instantly greeted with your own creation thanks to the customisation that Jelly Bean affords.

The fact that they've then given you a smartphone which has a specs sheet to rival the iPhone 5 and the Samsung Galaxy S3 for under £300 should only reinforce the fact that this is Google at its best, taking the best hardware and then offering it at a price that will have you head-scratching for days.