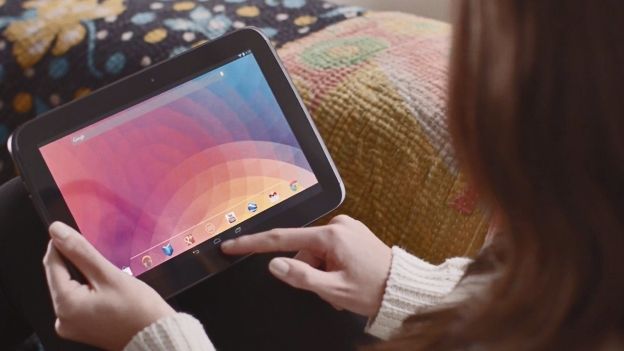 With its iPad conquering display and tantalising price tag the Google Nexus 10 from Samsung ticks two important boxes, but can it perform under pressure?

It's been a busy few months at Google HQ; first the Nexus 7 followed by the swoon-worthy Google Nexus 4 smart phone and now the much anticipated Google Nexus 10.

It's an impressive triumvirate, but with some superb big screen tablets already impressing – the iPad, Asus Transformer Pad and Samsung Galaxy 2 10.1 to name the best – Google will need to produce something pretty special to fill the heavyweight category.

With a price tag £80 lower than the iPad and a headline grabbing, Apple besting, 2560x1600 pixel display the early signs look good for the big screen Android tablet.

But have Google and Samsung done enough to divert you away from the competition? T3 put the Google Nexus 10 to the test to find out.

Let's get something out in the open: The Nexus 10 – switched off at any rate - will not make you weak at the knees.

Call it understated if you like, but it doesn't have that cutting edge 'wow' you'll find on the iPad or Galaxy 2 10.1. In fact the front edge curves act a bit like a fish-eye lens making the tablet feel larger than it really is.

That said the build quality is first rate and the statistics make for excellent reading. Weighing in at 603g and with a thickness of just 8.9mm the Nexus 10 is 49g lighter than the latest iPad. And it feels it too.

Flip it over and the grippy plastic and lack of right angles give you superb grip, and while it doesn't feel as premium as we hoped the tactile surface makes manhandling a treat. The surface greatly improves one-handed holding, which is especially important on a bigger tablet.

On the back you also get a landscape orientated 5mp camera with LED flash. Ports include MicroUSB, Micro HDMI, 3.5mm headphone jack and Pogo pins (we assume for docking).

There's also a plastic strip that looks and feels like a battery cover. Remove it and you'll find the usual serial numbers plus two magnets which we assume will be for covers. We hope they are, because the awful snap-on screen protector we were supplied with is embarrassing. It works fine, but lacks any of the design detail of the iPad's Smart Cover.

All our design dissapointments were instantly forgotten once the screen sparked into life. The Nexus 10's display is nothing short of sensational. The 10-inch Corning Gorilla Glass 2 panel boasts a record 2560 x 1600 pixels and a screen resolution of 300ppi. That's more than your HDTV and leagues ahead – statistically at any rate – than the iPad's much admired 264ppi Retina display.

To be fair, at these resolutions it is almost impossible to tell the difference between the iPad and Google Nexus 10. Both are stunning. What Google have though is a 16:9 aspect ratio which make movies a joy to watch and just about everything else a huge amount of widescreen loveliness.

As with the iPad's Retina display, some website images do look a bit blurry. No fault of the screen resolution, just a case of the display being too good for the web.

Equipped with a meagre 5MP in the back and 1.9MP front facing camera the Google Nexus 10 is never going to be a photographic power house.

The main camera isn't awful, but it certainly isn't as good as the iPad, or most new smartphones. What saves it however is Photo Sphere — allowing you to capture 360-degree panoramas very similar to Photosynth on Windows Phone. It isn't perfect and takes a bit of practice but it's addictive and the results can be fantastic.

Like the Samsung Galaxy 2 10.1 the Google Nexus 10 has two tiny slivers of front-facing speaker. They don't look much – combined with the black, on black on black colour scheme blend in nicely - but they sound great.

Obviously a decent Bluetooth speaker sounds better, but for everyday viewing they have plenty of volume and enough warmth to prevent you reaching for the headphones.

Gripping the edge will cover one speaker up, but thanks to the rubberised back you can rest the tablet in the palm of your hand without fear of falling.

Screen quality aside it is Google's unadulterated Jelly Bean 4.2 OS that excites us the most. With no manufacturer skins this is the purest way to experience the stunning interface.

Jelly Bean was good before, but some incoming updates [should roll out on 13th November] make it even better – especially for tablets. Multiple user support – different individuals are able to log into their own apps, settings and preferences – is a huge bonus for any families who share the tablet and should put an end to arguments over hijacked Facebook accounts.

The upgrade will also feature Miracast wireless display support, allowing the Nexus 10 to interact directly with a compatible HD TV. We expect huge things from this industry wide Wi-Fi sharing tool – think Airplay for everyone – and can't wait to get hands on.

As much as we adore the display, the OS and the tactile rubbery-ness we'd quite like some dedicated apps for the Google Nexus 10.

We appreciate developers need time – and encouragement – to reformat their products for the 10-inch screen, but until then most options are just over stretched phone apps.

With acres of unused white space and tiny – albeit pixel sharp text – many everyday apps just feel awkward. Engorged phone apps work wonderfully on the Nexus 7, but don't impress on the 10-inch screen with Twitter almost painful to read with anything but 20:20 vision.

With such a fantastic display we're sure it is only a matter of time before 10-inch specific Android apps come flooding in, but for now, if you need proof of how lovely they can/will/better be, take a look at Google's own selection; YouTube, Google Earth and Google + all look incredible.

The Nexus 10 is powered by a 1.7GHz dual-core Exynos 5250 processor with Mail T604 graphics and comes with a cool 2GB RAM. Combined with the effortlessly impressive Android 4.2 Jelly Bean operating system and you've got one impressive performer.

Everything is faultlessly fast and fluid, with apps loading almost instantly, games – even racing titles such as Need for Speed Most Wanted cruised along effortlessly – and HD movies never faltered.

Choose form 16GB or 32GB internal memory – fine, but a memory card slot would have been nice. There's also no 3G or 4G support (yet) so it is Wi-Fi all the way. That said, thanks to multiple-in, multiple-out (MIMO) technology and a promise of up to 4x faster download speeds, it's no slouch.

We're not convinced it is 4x faster than the Galaxy 2 10.1 or iPad but it's no couch potato.

With 9000mAh at its disposal the Google Nexus 10 claims 9 hours of video playback and 500hrs standby. Impressive?

You bet impressive. During our mixed use test – emailing, surfing, movie downloading and a bit of gaming – the Nexus 10 managed 10hrs between charges.

There's no doubt about it, the Google Nexus 10 is a fantastic tablet that challenges – and in the case of the 300ppi display beats - the iPad in almost every department. Google has produced a genuine contender that's slim, light and tactile; fast, effortlessly easy to use and a joy to play with.

The screen is a sensation and deserves the plaudits, but the Nexus 10 isn't perfect…yet. It gets pretty close – especially when you fully embrace Jelly Bean 4.2 – but until Google Play is furnished with more than a handful of 10-inch specific apps the iPad and its choice of 275,000 wins the battle.

But the war is far from over, and as more apps appear this stylishly slim, effortlessly intuitive and ridiculously good value tablet may well conquer all. It's the best 10-inch Android tablet available right now and that's high praise indeed.