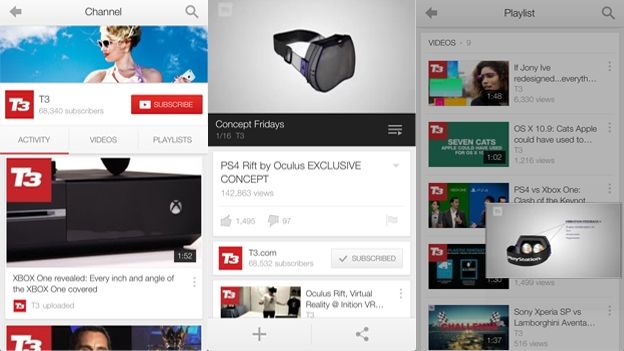 Google has updated its YouTube app for iPhone and Android bringing with it some new styling which brings the iPhone, iPod and iPad app in line with iOS 7 when it's released next month.

The app also comes with some major new features including the ability to minimise a video into the bottom right corner letting you browse in the backround.

Gestures are also now a major part of the app with a swide swipe removing the minimised video or a swipe from the side of the screen bringing up the main menu.

Google have also made it easier to watch playlists with on-screen controls letting you move onto the next or previous episode. Finally Cast has been given a tweak which lets you see what you'd like to play next, queue it up or watch it straight away.

This is the biggest update for YouTube in recent months and follows on from Google's update to Google Maps which saw the company integrate its most recent purchase Waze into the iOS and Android versions by adding live traffic updates.

The Google Maps update is passive so you don't need to update the app however the YouTube update is live now changing the icon to a flatter more iOS 7-friendly design.