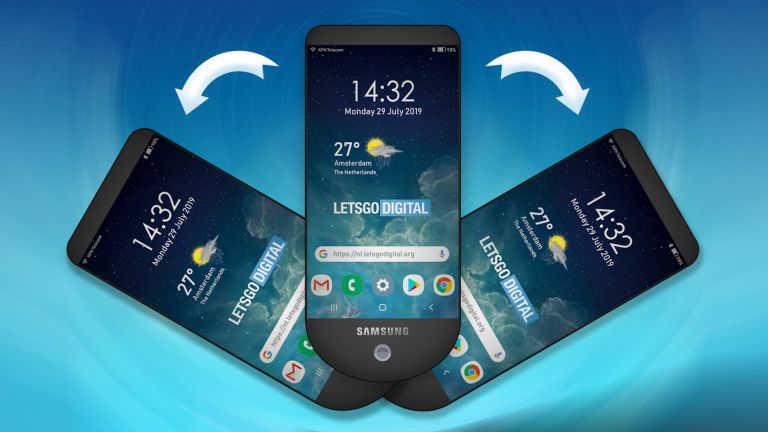 Samsung isn't afraid of pursuing some pretty out-there ideas. The South Korean company was the first to debut a palm-stretching phablet form-factor, and earlier this year, became one of the first to introduce a folding flagship phone.

So, what's next for the Seoul-based behemoth? Well, a bizarre new patent suggests Samsung is investigating the possibility of adding multiple stacked touchscreens to the same handset to create a fan-like effect. Intrigued? Yeah, us too.

The new patent, unearthed by the folks at LetsGoDigital, was filed with the Korean Intellectual Property Office, or KIPO, and approved in March 2019, before finally being published online on June 11, 2019.

The design shows three separate displays joined at a single point on the bottom bezel, enabling them to be spread-out like a handheld fan, or a colour swatch. The illustrations filed with the patent show Samsung envisioning one of the displays being rotated 180° to create a Nintendo DS-esque dual screen approach.

Interestingly, there are no physical volume, power or Bixby-summoning buttons anywhere to be seen on this handset – something that Samsung was widely believed to be working towards with its Galaxy Note 10 series, before dropping the idea.

It's unclear exactly what applications the swivelling, fan-like design will have, but it's a very unique approach to smartphone design. Perhaps a focus on gaming or Augmented Reality could help us see this new design in an entirely new light.

The Nokia 7373 had a similar design approach, although that was only used to swivel  out the physical keyboard – differentiating it from rival flip phones that were popular at the time of its release in September 2006.

Perhaps Samsung will take a similar approach and reinvent the Nokia 7373 with cutting-edge technology, much like Motorola is widely-expected to do with its seminal Razr smartphone with pliable OLED technology later this year?

Of course, multi-national companies like Samsung patent new technologies all the time that never make it into commercial products. It remains to be seen whether the South Korean firm ever uses the design seen in this patent.