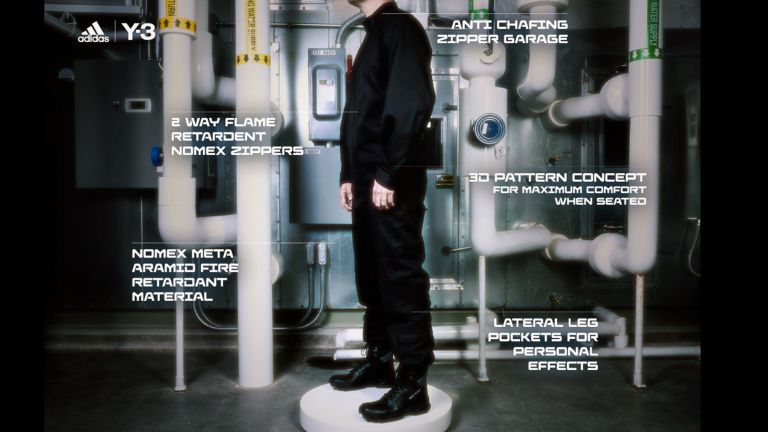 Want more details on the Virgin Galactic pilot's suit? We got 'em. The suit, set to make its wearers the best-dressed men and women in space in the near-to-not-so-near future has this delightfully deadpan promo video.

•In space, nobody can hear you scream (because they're wearing these earphones for running)

As you will have noted, the suit features Nomex Meta Aramid panels with bonded seams, lateral leg pockets and, our personal favourite, a "centre front zip gusset".

Y-3 - a clothing label collaboration between tracksuit purveyors Adidas and high-end Japanese designer fashion designer Yohji Yamamoto - has teamed up with private spaceflight firm Virgin Galactic to design sleek new flight suits and apparel for use in future trips into space. Fierce! And even better, the results look a lot like the suits worn by the constantly unfortunate crew of the Battlestar Galactica remake. Hopefully, genocide at the hands of a sentient robot insurgency will not follow.

The prototype flight suit and boots, which were recently unveiled at Virgin Galactic's Gateway to Space terminal in New Mexico, have been designed to fit the natural contours of an astronauts body and use materials such as leather and Nomex Meta Aramid materials. According to the two firms, the suits have been created based on flight tests conducted by Virgin's own Galactic Pilot Corps. Yes, Branson even has a flight corps.

"The pilot flight-suit prototype that we have developed truly represents both of our brands," comments Lawrence Midwood, senior director of Design at Y-3. "And, more importantly, will ensure comfort, functionality and support for the pilots of the world's first commercial space flights."