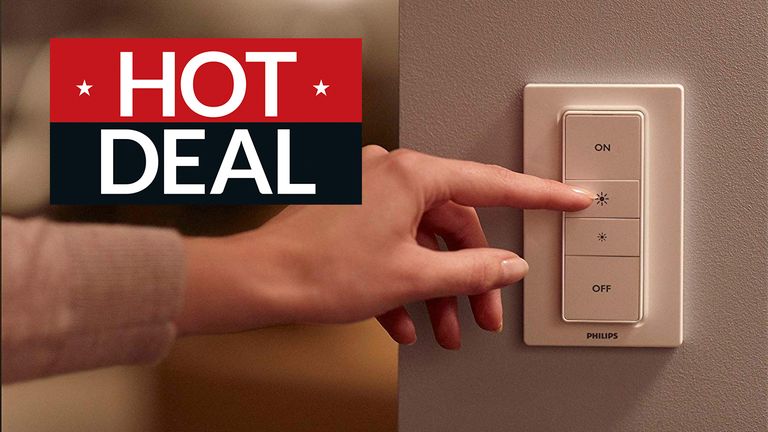 Philips Hue smart lighting is great, and definitely an easier way to change the ambiance of a room than repainting the walls or changing the wallpaper.

One of the things we particularly like about the Hue range of products is that as well as the bulbs there are lots of neat extras you can add to make it more fun or to make things a little bit more user friendly.

Personally, I think the dimmer switch makes a fantastic addition to a Hue setup. You can mount it next to your existing light switch so it's easy for visitors to control the lights in a traditional button-pressing manner, which as well as making them feel more comfortable should also stop them switching your lights off by the power switches (an annoyance that's enough for Hue owners to stop inviting guests round, to be honest).

The dimmer is battery powered, and can be attached magnetically to a plate that you mount to the wall. Once set up, you can use it not just to dim your lights, and to switch them on and off, but also to switch between four different scenes which you can configure using the Hue app.

Right now, the dimmer switch is 10% off at Amazon, bringing it down to £16.16. It's not the lowest price we've ever seen it go (that was £13.07 in December 2018) but it's the ballpark figure that this switch tends to drop to when it does get its price cut. You might want to get two.

Philips Hue Smart Wireless Dimmer Switch | RRP: £17.99 | Deal Price: £16.16 | Save 10%
You can use these switches mounted to their magnetic wall mount – just like switches from the old-fashioned days, which old-fashioned guests will appreciate, or you can remove them from the wall mount and use them as little remote controls from anywhere in the house. Note that the switches require that you have a Hue Bridge (which you probably do already).
View Deal