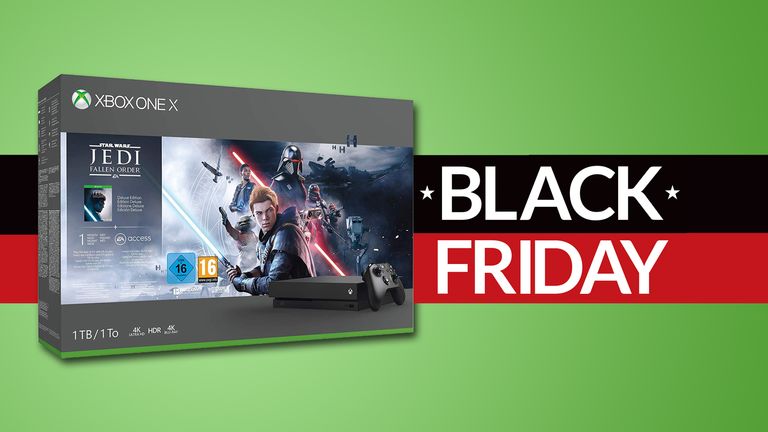 We have already seen a good Playstation 4 bundle deal on very.co.uk and now we have the first notable Xbox One X bundle deal, too: get the Xbox One X 1TB console with the latest – and dare we say, greatest – Star Wars game, Star Wars Jedi: Fallen Order, for £150 cheaper than list price.

Xbox One X 1TB Console – Star Wars Jedi: Fallen Order Bundle | Black Friday price £299.99 | Was £449.99 | You save £150 on Amazon
The new Star Wars game is regarded highly by the gaming community, rated 9 out of 10 on Steam and has an outstanding 94% rating on Google as well. Released only a month ago, this bundle deal is your chance to get your hands on this amazing game and a 1TB Xbox One X for way cheaper. £150 cheaper, that is.View Deal

Xbox One X 1TB – Metro Saga Bundle | Black Friday price £299.99 | Was £324.52 | You save £24.53 (8%) on Amazon
Shoot, sneak, and survive through an immersive post-apocalyptic saga. Includes all three Metro games, including the all-new Metro Exodus, where you flee the shattered ruins of dead Moscow, embark on an epic, continent-spanning journey in post-apocalyptic Russia. Sounds uplifting, as expected from a Metro game.View Deal

Xbox One X Gears 5 Limited Edition bundle | Black Friday price £299.99 | Was £408.99 | You save £109 (27%) on Amazon
This limited edition console features a dark, translucent casing that makes the Crimson Omen appear submerged in snow and ice, designed by Gears co-creator Rod Fergusson and the Xbox team. Bring the Gears universe to life: laser-etched cracks appear across the console’s icy top surface and snow drifts across a golden Locust symbol on the back. Gears 5 literally just came out, own it now, along with this stunning console!View Deal