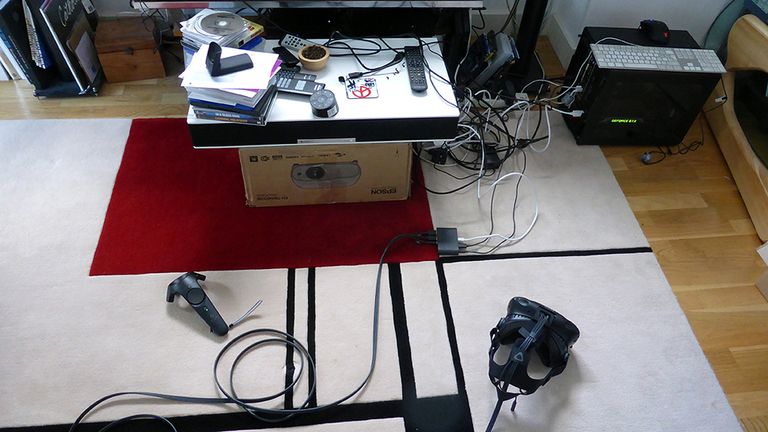 And so Christmas Day rolls around again: a day for church, the giving and receiving of presents, getting together with family members you've not seen all year... and of course struggling to set up the new gadgets and gizmos left for you under the Christmas tree.

Some of these devices are easier to get up and running than others, and in honour of the season, we've put together a list of the gadgets it takes us the longest to set up and configure. If you've got one of these off Santa, you might want to set aside a few hours...

Cabling, ports, the vagaries of Bluetooth - speakers of any type have all the ingredients for a complicated and time-consuming setup, even though the process might appear as simple as plugging a cable into a socket.

If you're talking a serious speaker set up then you could have six or seven or more different components to try and position around the room, each with their own connections and power sources. No doubt the richness of the audio will eventually make all this toil worthwhile, but you'll have to put in the hard graft first.

Even simple, portable speakers require pairing and unpairing with various devices, a process that isn't always straightforward and is likely to require multiple tries before you actually get the audio streaming in the way you want.

And if you've picked up a smart speaker then you can add on the time it's going to take you to connect it to your Wi-Fi and to learn all the commands you need to know.

Cables, software, controllers, sensors... setting up a PSVR, HTC Vive, or Oculus Rift is a serious endeavour for Christmas Day and one that's likely to take you a few hours at least.

You start off with your gaming PC or PlayStation 4 and then work backwards from there. Make sure you've got the instruction manual handy, because chances are you're going to be referring to it on a very regular basis. Even after you've got all the hardware correctly connected, you've got the software setup to go through as well.

Not only do you need a lot of time to get this setup right, you need a lot of space too, and you might have to usher the grandparents into the kitchen temporarily while you figure out where the room sensors are supposed to go.

The only consolation we can offer is that the setup will eventually be worth it, as you and your family members plunge into a series of immersive virtual worlds.

We commend you for your intentions to get the whole of your home's heating controlled by one smart box on the wall, but be prepared to invest some time and effort before you can sit back and turn the radiators off in the bedrooms from your smartphone.

Systems from the likes of Nest and Hive are a breeze to use once they've actually been configured, but to get started you're going to have to get them hooked up to your boiler, which may or may not require some extra hardware depending on how old it is.

Then you've got to configure any accessories you might have invested in to dot around the house, before finally turning everything on and crossing your fingers that it works. Let's hope the family don't freeze in the meantime.

In fact pretty much any type of smart home gadget has the potential to take up a large chunk of your Christmas Day with its setup routine.

Don't get us wrong - we like drones, a lot. But even the keenest drone enthusiasts would have to admit that it takes some time to learn the ins and outs of operating one of these autonomous flying machines.

Even preassembled drones need some putting together in terms of the rotors and camera attachments, so you're going to be spending a certain amount of time getting set up even before you venture out into the great outdoors. You also need to be charging batteries for the drone itself and the controller it comes with, unless you're using your phone.

Flying a drone is harder than it looks, so you're going to have to pay close attention to the instructions to avoid sending your new gadget straight into the nearest tree or pylon. Even if you spend all Christmas Day with your drone, it pays to take it slow and steady and not attempt too much too early.

Even when you've worked out how to set up and fly your drone, there's more reading to be done - you need to familiarise yourself with the rules of drone flying, whether you live in the UK or the US.

To be fair to Apple and Google, it's much easier to set up a new phone than it used to be. A lot of your stuff, like contacts and calendars, appears almost immediately once you've signed in using your Google or Apple ID.

That said, it can take you a while to get your new handset just right, especially if you don't have the old one any more. You need to get all your apps downloaded and configured again, which is going to take a while if the rest of the family is using up bandwidth trying to stream Arthur Christmas on Netflix.

Can you remember your Twitter password? Where are all your movie files and photos? Are all your WhatsApp conversations backed up somewhere? Shifting all of your digital life from one device to another is no easy task.

And if you're moving from Android to iOS or vice versa, it gets even more complicated - you might want to book an extra day off work...