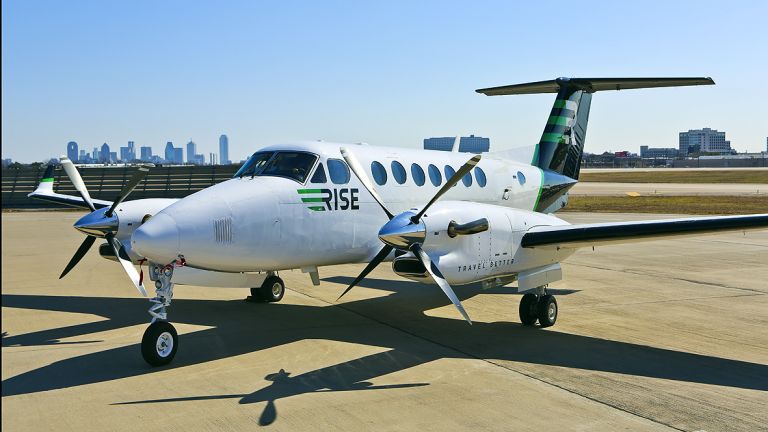 Ever wished getting a flight was more like hiring a taxi? With private flight-sharing company Rise, it kind of is. Furthermore, the US brand, which is now entering the UK market, offers an unlimited travel service at the click of a button, for a fee of "in the region of £1,500" per month.

Rise is a membership service where you pay a monthly fee to travel in a private plane with other Rise members.

You can book a flight in seconds using Rise's “Membership Air Travel Information System”. This is via the Rise app, which manages your profile and preferences, as well as flight and route management, checking availability of seats, and showing wait lists for flights, for instance.

Rise uses "centrally located" airports (Northolt or City are mooted for London, for instance) and private aircraft "selected for safety and comfort", with members driven in cars laid on by Rise, "to the door of the aircraft," with "no intrusive security or time consuming queues."

You're then greeted by "Rise Member Services Representatives", armed with iPads. These detail who's on the flight, and whether, for instance, they prefer their peanuts in a bowl or straight from the bag, a matter some South Korean flyers feel strongly about.

The flights are on "clean, spacious and quiet aircraft." The US arm of Rise's operation exclusivelyuses Beechcraft King Air 350planes, a well-established private/military propeller plane that dates back to 1972 in its original incarnation (the 350 model first flew in 1981). Capacity is about eight to ten passengers per plane.

Upon arrival, again, cars are waiting to pick punters up with, Rise is at pains to point out, "their engines running". So good news if the fuzz are after you.

Just as Uber doesn't directly employ any cabbies, Rise doesn't actually own any planes. They're all operated by third parties, with Rise handling the bookings and providing the customers.

Maybe the catch here is that if the flights fill up fast, you may not be able to fly quite so immediately as you might wish. But then that's because you're paying £1,500 per month rather than £10,000+. Flights are at set times, rather than literally at the drop of a hat, and holders of the higher-priced subscriptions get priority bookings at busy times.

To give you an idea of how it works, full pricing in the USA is as follows: Express level membership is $1,650 per month, Executive $2,150 and Chairman £2,650 - you get 2, 4 or 6 simultaneous reservations. The two higher-level Risers also get one free "companion" per month (handy if you're Doctor Who, for instance).