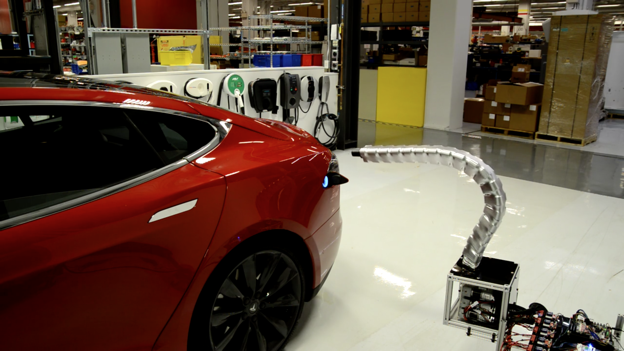 Tesla car owners are about to get a creepy new companion that plugs itself in to begin charging as soon as you enter the garage and the best part is you don't have to do anything about it.

A video tweeted from the official Tesla Motors account showed a snake-like device worming its way into the charging port of the Model S before it begins flashing with unadulterated joy when the electronic juices are flowing.

The arrival of a robotic charger isn't exactly unexpected. Tesla CEO Elon Musk tweeted back on New Year's Eve that the company was working on just that and yesterday Musk admitted that the Tesla Snakebot auto-charger prototype “does seem kinda wrong”. We're with you there Elon!

Alongside the Snakebot charger, Tesla detailed the new 'Ludicrous Mode' that takes the 'Insane Mode' to new levels by adding some extra horsepower to the Model S engine to allow it to go from 0-60mph in just 2.8 seconds.

Tesla's electric cars are currently out of reach of most consumers due to the price-tag. That could all change by March 2016, however, with the introduction of the Model 3 that will cost $35,000 (around £22,000) and run for 200 miles off a single charge.

Musk isn't just targeting the car sector either. His Powerwall home battery that could revolutionise the way we power our homes saw a whopping 38,000 pre-orders by May 2015 and that number is likely to have ballooned since. When people say invest in Tesla, they really mean it!