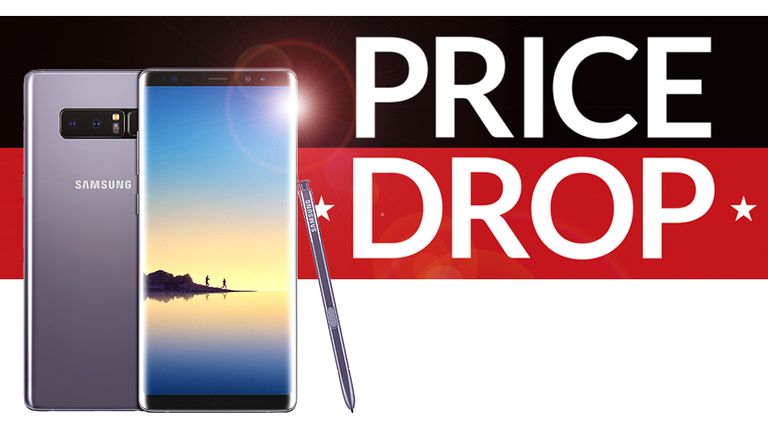 While there is undoubtedly a certain frisson to opting for the latest and greatest gadgets as soon as they’re released, looking back through the annals of time can throw up some immense deals.

So, while the Samsung Galaxy Note 9 – the current flagship – is superior to its predecessors and touts a number of new features not seen in earlier entries, including the ability to use the S Pen stylus as a remote camera shutter, it's worth keeping an open mind and not entirely ruling out the previous models.

The Galaxy Note 8 has a lot in common with the Galaxy Note 9. Both handsets feature a very similar display size – 6.3-inch AMOLED for the Note 8, 6.4-inch on the Note 9 – with the same Infinity Display design, dual-curved screens, and glass back for wireless charging via the Qi standard.

In fact, the only discernible difference between the designs of the two handsets is the placement of the rear-mounted fingerprint sensor, which was a little finicky beside the camera lens on the Note 8, before being relocated beneath the camera module on the Note 9.

Unfortunately, those with the older hardware will have to wait a tad longer for the software update to drop. Samsung expects to roll-out One UI to Galaxy Note 9 users this month, while Note 8 owners won't see the improvements until sometime in February. But what's an extra few weeks amongst friends, eh?

And those who are willing to put up with the wait can get the Samsung Galaxy Note 8 for an absolute steal at the moment.

Those who want to buy the smartphone outright and then use whatever SIM-only contract they fancy can pick-up the Galaxy Note 8 SIM-free from Amazon UK for £485. Given that it cost a whopping £869 when it launched in August 2017, that is a considerable saving on the handset.

For comparison, Samsung has currently slashed £50 off the price of its flagship Galaxy Note 9 in the January sales, but even with this generous discount, the handset will still set you back £849 – more than £360 more than the Galaxy Note 8.

If you'd rather get your Samsung Galaxy Note 8 on contract, there are some good deals to be had there, too.

Samsung Galaxy Note 8 | Unlimited Minutes, Unlimited Texts | 4GB of 4G data | Three UK | £30 a month (£9.99 upfront)
Well, if you're not fussed about getting the latest and greatest Galaxy Note handset, this is a stone-cold bargain. Samsung has already confirmed this handset will be getting its all-new One UI mobile operating system, so Note 8 owners are definitely not being left behind anytime soon. While it might not have the latest and greatest features, including the remote camera shutter feature of the new S Pen, this is still an incredible smartphone – and now with a "how much?!" price tag.View Deal

AffordableMobiles.co.uk is currently selling the Note 8 for £30 a month. The 24-month contract runs on the Three mobile network, so you'll get all of their usual benefits, including free roaming in more than 70 countries worldwide, as well as EasyJet priority boarding and bag drop perks.

With an upfront cost of just £9.99, you'll get unlimited minutes and unlimited texts, as well as 4GB of 4G mobile data to boot.

That all comes to a total of £729.99 over the course of the two years for all of your calls, text messages, mobile data, and the smartphone itself – still a saving of £139 on the price of the handset alone just one year ago. Bargain.