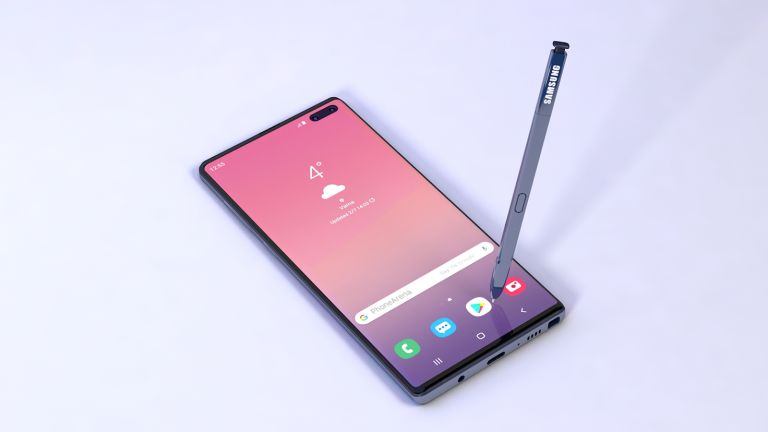 Samsung will debut a new entry in its popular Galaxy Note series this summer. The range typically builds on the features introduced with the latest Galaxy S handsets launched earlier in the year, with an increased focus on productivity and new stylus-based functionality.

We're still six months away from a Galaxy Note 10 release date, but we've already heard a torrent of rumours about what to expect with the next-generation Note, including the number of cameras, industrial design, and the fact that it looks set to discard the 3.5mm headphone port.

However, one important detail was missing from the leaks so far – we hadn't had confirmation that Galaxy Note 10 would ship with support for 5G networks.

Thankfully, that has now changed. New code unearthed in the Samsung Galaxy S10 reveals the existence of a 5G-enabled Galaxy Note 10, likely still in testing behind closed doors at the South Korean technology company. The reference was discovered buried in the kernel source of the Galaxy S10 by XDA Developers.

The small text string uses a codename for the Samsung Galaxy Note 10 which first surfaced almost six months ago – Da Vinci. The kernel refers to a device called "davinci5G", which is likely to be the 5G-enabled variant of the Galaxy Note 10.

Given that Samsung has already unveiled a 5G-enabled version of its Galaxy S10 series, it seemed logical that a 5G-boasting Galaxy Note 10 would follow later this year. In fact, US carrier AT&T announced earlier this year that it would support a Samsung handset with support for 5G networks scheduled to launch in the second half of 2019. Although that timeframe could apply to the Galaxy S10 5G, tipped to launch in "early summer", or the Galaxy Note 10, which will launch in August should Samsung stay true the schedule established in previous years.

Elsewhere, the Galaxy Note 10 looks set to boast a pocket-busting 6.66-inch Infinity-O AMOLED display. Ultra HD 4K and HDR support could be included too, making this potentially one of the greatest displays ever stuck on front of a smartphone.

On the back of the flagship handset, we expect to see the same quadruple camera array on the Galaxy S10 5G. This includes an all-new hQVGA quality sensor, which equates to 0.038-megapixels, that will enable adjustable, artificial bokeh-style blur behind the subject of the image in real-time when shooting video.

While a number of flagship handsets already offer Portrait Mode-esque photos, this is the first time we’ve seen the same effect applied to video. The new depth-sensing camera will also enable new Augmented Reality (AR) modes and effects in the future, Samsung has promised.

Inside, we're likely to get a serious bump in specs – with the Qualcomm Snapdragon 855 or the Samsung-built Exynos 9820 likely to be aboard the Note 10 for super-fast processing, video editing, and better battery life. However, it's possible that a new Exynos chipset will be available in time to power the Galaxy Note 10. The Exynos 9825, rumoured to launch later this year could give the handset even more of a boost in performance and battery life, as well as 5G network capabilities.

Samsung typically launches its new Galaxy Note smartphones in August. However, we're likely to hear more rumours and leaks in the coming weeks, so stay tuned.