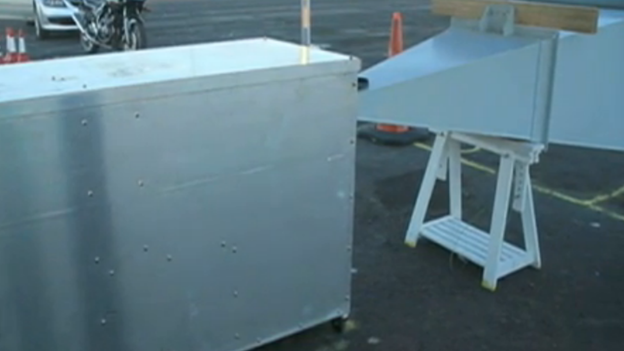 A 'pulse weapon' that can be used to stop cars in a non-lethal way has been demonstrated in public for the first time.

The RF Safe-Stop system uses radio-frequency pulses to “confuse” a car's electronic systems. That confusion essentially cuts off its engine.

The system was designed by British company EV2. It is one of several companies trying to bring such products to market.

There has been a lot of police interest in the device. Speaking to the BBC, deputy chief constable Andy Holt, of the Association of Chief Police Officers (ACPO) said the machine had “potential, but it's very early days yet”.

During the demonstration, E2V used the pulse weapon against a number of cars.

According to Radio 4 presenter Chris Vallance, "the BBC a car drove towards the device at about 15mph (24km/h).

"As the vehicle entered the range of the RF Safe-stop, its dashboard warning lights and dials behaved erratically, the engine stopped and the car rolled gently to a halt.

“Digital audio and video recording devices in the vehicle were also affected.”

According to Andy Wood, product manager for the machine at E2V, "It's a small radar transmitter.

“The RF [radio frequency] is pulsed from the unit just as it would be in radar, it couples into the wiring in the car and that disrupts and confuses the electronics in the car causing the engine to stall.”

Despite its apparent success, some experts have warned that the system may not be enough to stop a vehicle quick enough.

Others raised concerns that the system may interfere with electronic braking systems.