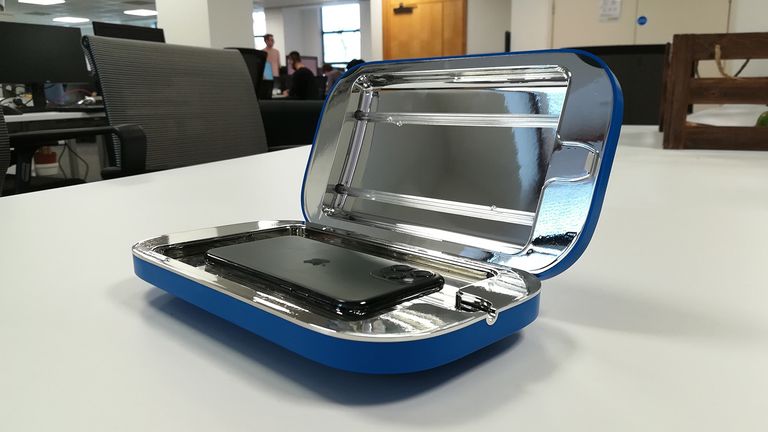 PhoneSoap is a clever device that promises to sanitize your devices using UV light. It looks rather like a mini sunbed for your phone. Pop your phone onto the PhoneSoap bed, close the lid, wait five minutes and voilà, it should be completely germ-free.

Getting your devices clean is a particularly good idea right now – there's no point frantically washing your hands every 10 minutes right now (or trying to find some hand sanitizer), if your phone is crawling with bacteria. As PhoneSoap sagely says on its box: "it's like the third hand you never wash".

PhoneSoap claims that the average phone is "18x dirtier and contains more harmful bacteria than a public toilet".  The product uses ultraviolet light to kill "99.99% of germs".

It's not just for phones, either. The extra-large bed on the PhoneSoap Pro should comfortably fit any one of the best smartphones (no matter how large-screened), but it's also useful for a range of other things you can't clean easily with soap and water. So that's tech like earbuds and computer mice, but also things like keys, bank notes and jewellery.

We tested the PhoneSoap Pro, which is available from 18 May. If you need something sooner, the older PhoneSoap 3 can be preordered for shipping 15 April. The PhoneSoap Pro follows the PhoneSoap 3, and alongside a larger sanitizing bay, it packs twice the number of UV bulbs, promising to clean your device in half the time of the original (just 5 minutes, rather than 10).

PhoneSoap Pro review: Does it work?

To test just how effective the PhoneSoap Pro is, we ran a basic test with some protein swabs we ordered online. Two team members' phones came back with a green (clean) result when initially swabbed. We're not sure how sensitive these tests are, but it seems unlikely that they're actually completely germ-free.

However, one team-member's pair of AirPods produced a purple swab, indicating they weren't clean. We put them in the PhoneSoap Pro for five minutes, and the swab came back green (clean). Based on this quick test, we were satisfied that the PhoneSoap Pro was definitely doing something.

The PhoneSoap Pro is easy enough to use. Plug it in, place your device in the bay, close the lid, and the disinfection process will start automatically. The lightning icon on top of the device lights up to show sanitization is in process. If you want to pause cleaning for whatever reason, you can put your finger on the lightning icon again. After 5 minutes the light will go off and you're free to remove your device.

Our model came with a US mains cable, but it charges via USB-C so a replacement was easy to find. There are also USB-C and USB out sockets that enable you to charge devices while they're being cleaned (there's a hole for your cable to feed through). It's a nice touch but hardly essential given it's only going to be in there 5 minutes.

The outside looks simple and smart enough, and the inside is an ultra-shiny, cheap looking fingerprint magnet. But if this is the surface the enables the PhoneSoap Pro to do its job, we're not complaining.

'Microsuction feet' promise to keep the PhoneSoap stable and anchored to the surface. When we first removed the plastic covering, the device stuck so firmly to the desk we had trouble moving it at all. After that they failed to stick at all, and the PhoneSoap Pro tipped over unless there was a heavy device in it. Overall, not a successful feature – but again, not a deal-breaker.

PhoneSoap Pro review: Should I buy it?

Right now it seems a smart move to take precautions to sanitize devices and any other objects you're handling frequently. While our test wasn't exactly laboratory conditions, the results did show a clear difference in germ levels before and after PhoneSoap-ing. The downside here is that there's a lag time in getting your hands on one of these. A PhoneSoap Pro might arrive too late to be helpful in this CORVID-19 outbreak, but a PhoneSoap 3 (which uses the same tech) will be with you mid-April.