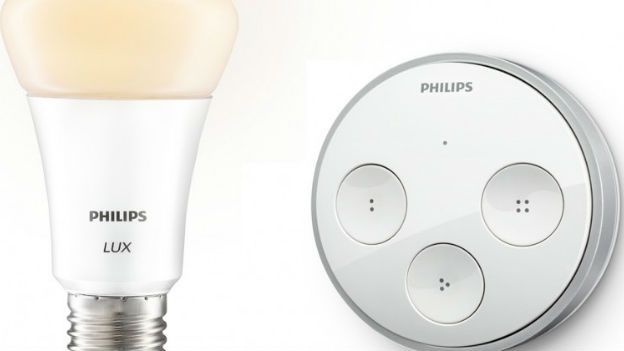 Phillips has added a web-connected tap switch and a white-only lux bulb to its the Hue smart home lighting lineup.

Philips has added to its smart home Hue range of products with the Hue Lux and Hue Tap, both of which are set for release this summer.

For just shy of £90 you can have yourself the new Philips Hue Lux starter kit, which includes both the Lux bulb and the Tap control switch. The Tap lets you control connected lights wirelessly by tapping one of four buttons.

The new Lux bulb meanwhile is a single white LED that, while new, is still fully compatible with the current Philips Hue kit. So, even if you already have the original kit you can pick up the new bulbs at a cheaper £29.99.

The Lux and Tap were a timely introduction as LG's Smart Bulb range was also announced this week. But now the Hue Lux makes home light control a possibility for people who don't have £180 to splash out on a bulb.

“Hue Lux is another entry point for people who are ready for the connected home,” Filip Jan Depauw, senior director at Philips Lighting said.

“Hue Lux offers personal wireless functional lighting, giving users perfect control over their homes by reinventing the dimmer switch and giving you control via an array of apps."

Hue Lux will be available in North America and Europe at selected stores later this summer and will be accompanied by a new app update from Philips to control the system.