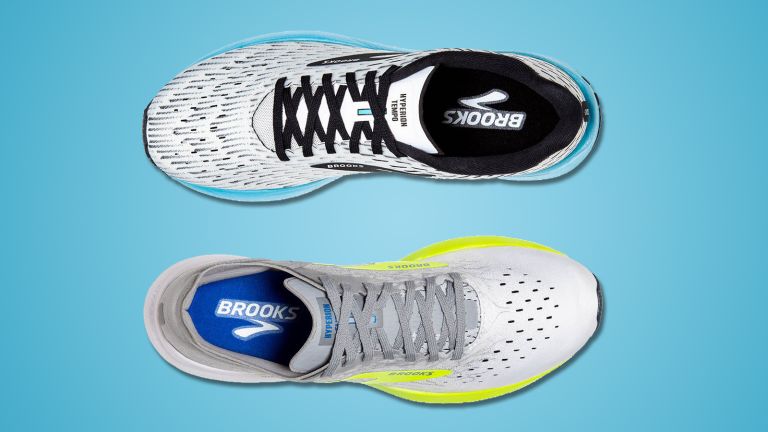 Brooks Running launched its fastest running shoes to date in Amsterdam just last week, at the Brooks Innovation Camp 2020. Two shoes in fact, the Brooks Hyperion Tempo and Brook Hyperion Elite, both "developed for those runners who look for that competitive advantage and protection over longer distances".

In the run-up to the Tokyo 2020 Olympics, there are heated discussions about some of the best running shoes you can buy – and some prototypes that you can't. In particular the Nike Vaporfly range – running shoes with thick foam cushioning, containing a carbon plate that further aids energy return.

This isn't just a case of Brooks releasing two shoes at once; this is a true tandem offering, with the brand emphasising that the shoes are designed to be used together. The Tempo is optimised for training and the Elite for racing. That's an interesting idea and potentially useful to runners, as well as lucrative for Brooks.

Brooks Hyperion Tempo: the one for training

Using the new ultra-light DNA Flash cushioning in the midsole, the Hyperion Tempo is designed for running workouts and training days. The guiding principle for designing the Brooks Hyperion Tempo was to reduce deviation from the optimal stride pattern and to maximise energy return, but without helping the runner too much.

It's not that Brooks wants you to suffer, but if you put the effort in during your training, you will be repaid with legs that are more ready on race days – then you can truly appreciate the super light Brooks Hyperion Elite race shoe.

In Brooks' words: "The Hyperion Tempo is a light and responsive shoe that reduces deviation, and returns the energy during the run, allowing the runner to train harder with less overall fatigue and to recover faster."

Some of the key features of the Brooks Hyperion Tempo:

Brooks Hyperion Elite: the one for racing

Just 5 grams heavier than Nike ZoomX Vaporfly NEXT%, the Brooks Hyperion Elite tries to pull off the same stunt as Nike (or even the Hoka One One Carbon X): a super lightweight, carbon-plated, well-cushioned running shoe that delivers excellent energy return and comfort. Of the three shoes mentioned, the price of the Brooks Hyperion Elite sits in the middle of the range with its £210 price tag – the Nike being £240 and the Hoka One One £160.