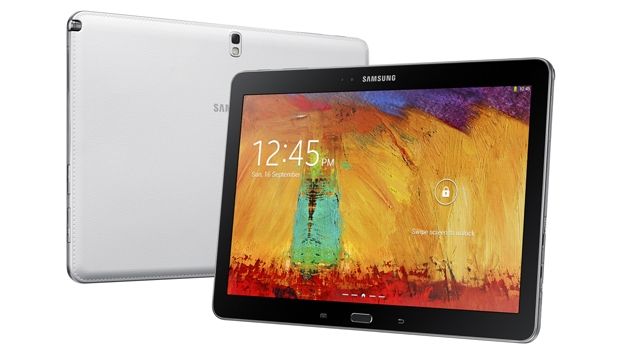 Samsung's new Galaxy Note 10.1 has been given a refresh at IFA 2013 boasting a higher-than-HD display and Samsung's new Knox security software

One of the biggest updates has been to the display with the 2014 Edition Galaxy Note 10.1 now sporting a WQXGA 2560x1600 Super clear LCD display which, if you're interested, is four times the pixel density of the old Galaxy Note 10.1.

On the back you'll find an 8MP camera whilst a 2MP front-facing sensor takes care of HD video-calling. Elsewhere you'll find a huge 3GB RAM and options of 16, 32 or 64GB internal storage with microSD support up to 64GB as well.

Also getting a refresh is the S-Pen which comes with improved multi-tasking and S Note functionality. With features like Multi Window users can run separate instances of the same app and then drag content from one window to the other using the S Pen.

Of course the Galaxy Note 10.1 will also be compatible with the newly announced Samsung Galaxy Gear smart watch which was also announced at the Samsung Unpacked event at IFA 2013.

At 7.9mm thin the new 2014 edition of the Galaxy Note 10.1 will be available globally from Q3, there's no word on an exact release date or a price but expect Samsung to keep it in line with its current Galaxy Note tablets.

Samsung also unveiled Samsung KNOX, the company's secure software which has been designed to take on BlackBerry Enterprise Service by offering a completely secure partition between your work content and your personal content on your device.

All your sensitive information becomes locked inside what Samsung is calling the 'Container' where system-level protection defends against malware and phishing attacks as well as physical hacking attempts if the device is lost or stolen.

The Container can be used as a personal safe storage location or can be utilised by businesses to create a secure working environment on Samsung's smartphones like the newly announced Galaxy Note 3 and the Samsung Galaxy S4.

Samsung has confirmed that KNOX will be arriving on the 2014 Galaxy Note 10.1.