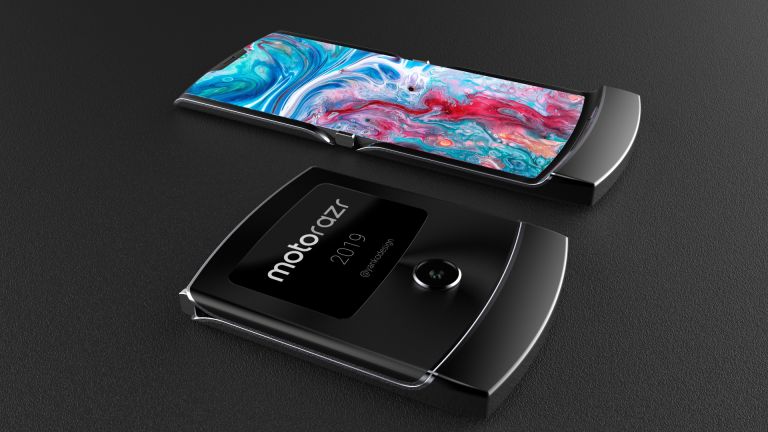 Not content to let Samsung hog the spotlight with its Samsung Galaxy Fold, Motorola has let slip a barrage of leaks around its Motorola Razr relaunch, scheduled for November 13. After a raft of concept art, technical specifications and more have hit the web, we might have the most significant leak so far: an image of how the phone is set to look in the real world.

Mobile news site DroidShout was sent a leaked image from an anonymous 'reliable source', featuring the Motorola Razr in hand. Check out the smuggled shot below:

Right off the bat, we can see the clamshell-folding phone is perfectly straight when unfolded, rather than kinked like the flip-phones of old. A chunky amount of bezel at the bottom adds to the retro aesthetic, with a button that could incorporate fingerprint scanning tech.

That rumoured 6.2-inch OLED display, packing a resolution of 876×2142px, looks quite big when combined with the additional space top-and-bottom, although the phone's folding mechanism will do a lot to reduce the size when carrying it around in your pocket.

Although the thick bezelling makes it stand out against modern smartphones when open, the additional space is likely to hold a lot of the slender phone's processing power. The phone is said to arrive with an octa-core Snapdragon 710 processor, paired with 4 GB of RAM and 128 GB of storage, or 6 GB of RAM with 256 GB of storage, and a 2,730 mAh battery.

We're sure to have even more leaks cross our desks as that November 13 date creeps closer, but for now, we'll have to wait and see if this secret image is an accurate reflection of the finished product. While you're waiting, check out the Motorola Razr's potential competition, as Samsung allegedly gears up with its own clamshell-folding phone.