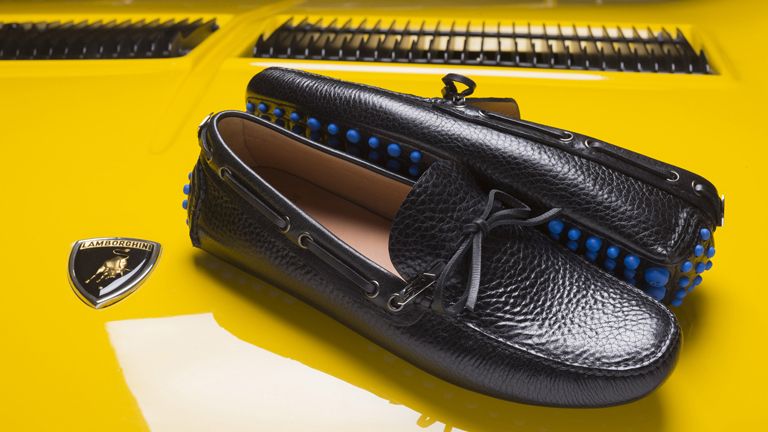 If your second car really is a Ferrari, exorbitant carbon fibre suitcases and plush office furniture inspired by iconic auto designs may be mere fripperies. But for the rest of us, such sports car branded luxuries cost more than a banger. We've rounded up the most extravagant and bizarre spin-offs made by the likes of Bugatti and Rolls Royce.

There's a tried-and-tested romance about wicker picnic baskets and classic sports cars, but how about a blinged-out hamper for a Roller? The Picnic Hamper belongs to the Phantom Zenith Collection and is designed to be housed in the boot of 50 limited edition Phantoms costing around £420,000.

The case, made of polished wood, metal and leather, contains everything for a high-class picnic, including handmade cutlery, lead crystal champagne glasses, plates, monogrammed napkins and a built-in walnut chopping board. Fancy – but Jeeves isn't included.

'Driving shoes' tend to be worn in and comfortable but too gross to wear to the supermarket. However, drivers of a Lamborghini, may need something more special. In 2013, the Italian supercar maker teamed up with Prada to create the a must-have moccasin called Bull 50° to celebrate 50 years of making coverable sports cars. Crafted from 'Toro' calf leather with rubber studs made from the same material as Lamborghini tyres, they came complete with the logo and in black, blue and an understated bright orange. While the auto maker has now partnered with Mizuno to make running shoes, the Bull 50° moccasins are more ostentatious and a perfect fit for the attention-grabbing supercar.

And now for the most unlikely spin-off. Porsche's shisha pipe. While sports cars are now huge badges of honour in the Middle East where shisha pipes are popularly used to chill out, many people raised their eyebrows when Porsche Design bought out its own version. The pipe, made of aluminium and hand-blown glass, is sleek and stylish as you might expect with the company dubbing it 'a breeze of luxury'. It's claimed to provide an 'extraordinary experience' and the first version was such a hit there's now a second that customers have to wait to get their hands on due to 'high demand'.

If drivers of Bentley's Bentayga – the world's fastest and priciest SUV - have any spare change, they may want to consider a matching set off golf clubs to throw in their palatial boot. The Bentley Golf irons are hand-forged in Ichikawa, Japan, a town with a historical heritage of forging which goes back to the period of Samurai sword production, and feature the 'the rear arch haunch line of the Continental GT to the subtle curves of the Mulsanne's front wing' - apparently. Of course, such fancy clubs demand a posh bag and Bentley has a range made of waterproof material and leather, with the tour bag priced at £2,495 while the most discerning of golfers can invest in a sterling silver golf ball marker – a snip at £70 - as well as balls, gloves, bag, towel, tees and even a matching brolly bearing the logo.

For those who miss sitting in their sports car during office hours, there's a Porsche office chair. The leather chair is the same as in the current 911, with the logo embroidered on the head section - only it swivels on five casters instead of being tethered to the inside of a sports car. The height's adjustable and for the lazier exec, there's an electrical backrest adjuster – and of course a hook for a suit jacket on the rear. The only thing it lacks is heating. The company also makes a 'GT3 Cup Shelf' made from an original 911 GT3 Cup rear spoiler. It sits on anodised aluminium brackets, fixed to the wall with auto racing screws no less.

If you can afford a Rolls Royce Wraith – the most powerful Roller ever made – the chances are you can afford a few luxurious holidays too. And what better way to pack your finery in than in six pieces of matching luggage, designed with the help of head butlers from some of the world's best hotels.

The lightweight carbon fibre cases have handles that have been designed not to put pressure on a manicured hand, while invisible stitching is used like that on the car's steering wheel. The Spirit of Ecstasy (the flying lady figurine) is emblazoned on the Wraith Luggage Collection cases that the company says are put together by 'master craftspeople adorning white gloves so as to preserve and protect the leather of unequalled quality.'

Chess in the fast lane

The game of chess may be more about strategy than speed, but that hasn't stopped Ferrari bringing out a branded chess set, made from everyone's favourite Formula One material – carbon fibre. In fact, the chess and draughts set is made from carbon fibre-covered wood, while board is carbon fibre and fibreglass, but it features the enamelled metal Ferrari shield on the front. The handmade chess pieces themselves are made from black and red varnished wood and the knight is inspired by the Prancing Horse. Cue fights over who gets the pieces in Ferrari's signature red.

A McLaren for the kids

Forget pushbikes, now-a-days the luckiest children have an electric supercar to drive. McLaren has just launched a kiddies version of the P1 for 3-6 year olds that looks just like the real one – with a few differences. Obviously, it's slightly smaller, but the plug-in model also comes with a central driving position like an F1 car and an open top, whereas the real P1 isn't available as a convertible. But like every McLaren, its acceleration is startling and the P1 mini goes from zero to maximum speed dash takes just two seconds.

The car has McLaren's signature dihedral doors and is the most compact car yet to wear the McLaren badge. It surges into life at the push of a button that automatically activates the lights. An MP3 player and audio system come fitted as standard and is helpfully already pre-programmed with every popular nursery rhyme. It also features a reverse gear in addition to its three speed, forward transmission – handy for kids who get cornered in a playground.

Luxurious bags and a fat wallet

Bentley's Continental Handbag may cost less than its car of the same name, but it's still a seriously luxurious item. Available in two sizes, it comes in a sophisticated colour palette of Burnt Oak, Portland – described as a 'grown-up taupe' and Dark Sapphire, while for men, there's a Heritage backpack inspired by classic designs that's made of quilted leather.

If owners of the car and bags haven't spent all their money, they can invest in an opulent wallet or card case in which to stash their spare cash.

James Bond's had some awesome power boats over the years, but now there's one to match his car. Aston Martin has debuted its first boat, the 37-foot AM37, which is expected to reach speeds of 50 knots. The daycruiser can be transformed into an overnight berth because the table turns into a bed – perfect for forbidden trysts on a secret mission. The cabin comes with mood lighting and air conditioning not to mention a coffee machine, oven and fridge for champagne.

The attractive vessel has a wraparound windscreen created from a single piece of sculpted glass, while sliding deck technology allows owners to cover the cockpit of the boat completely at the touch of a button. The three lightweight carbon panels fold under the aft deck when the cockpit is uncovered and there's a pop-out swim platform for fun at sea. For the captain, there's a comfortable leather seat and flash dashboard like you'd find in an Aston car, as well as an entertainment system.

Price: If you have to ask…